OH, WOE, WOE, WOE!!!
BEWARE, you sea-side and lake-side kitties!! not only can the vishus deer creep up on you from the underbrush, they can sneak up through the waves, where you would least expect it!!! who knew they could swim???

this brave but foolhardy fisherman barely escaped being eaten while on his own boat. he caught the vishus deer swimming sneakily up to raid his boat for tender yung joosy cats!! 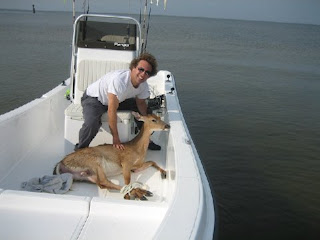 maybe he whapped it onna head wif an oar an' drug it aboard. we dunno WHY he wanted it in his boat. later on (we figger it got to threatening him), he put it back onna beach nearby. obviously, he doesn't haf any kitties at home, or he woulda left it inna lake!
Posted by Meowers from Missouri at 8:57 AM

This confirms my worst fears: NOPLACE is safe from the vishus deers.

This is just unbelievable! Yet I believe it!

Another one! Oh my goodness, lock the doors momma, who knows when they'll come walking in.

Thanks for the warning!!

At least they tied up its feets!!
---Beezer

Thank God for Skeezix for pointing me in the direction of your blog. I had no idea that the vishus deer could swim. Thank you very much for the warning. Like Daisy said, No Place is safe from vishus deer. They are everywhere!

Just so yoo know, at Mao & Rocky's Vishus Deer Repelunt Werld Hedqwarters, we're werking on a harniss yoo can ware so yer can of vishus deer repelunt is always with yoo. We ixpekt to have them reddy by 2010 or 2011.

Whut a stoopid deer! What cat in his right mind would be caught dead on a boat?!

Yer reeport is extreemly informutive and helpfull. Thare's no telling how many cats' lifes yoo saved by gitting the werd owt. I'm going to be watching the big rektangul lake in owr bak yard vary carefully. I thot all the splashing at nite lately was frum the coons havin pool parties, but now I'M SERTIN IT IS THE VISHUS DEER!!!!!!!! aaaaarrrrgghhh!

I certainly hope there were no cats on that boat.

Oh man, that is a horror story on a boat, guys. Luckily I don't think I'll ever go out on a boat, seein' as how just bein' in a car makes me sick, but still...good to know.
Your buddy, Jimmy Joe

OMG we didn't know they could swim ~The Fluffy Tribe

Did you see my Thursday Thirteen from the 16th?

I found out the orcas will eat vishus deers that go all swimming in their waters!!!

I used to live kinda near the waters where the orcas live, maybe that's why I didn't get eaten!!!