on saturday, mom went to visit her furriend, auntie joni (who was the furst mom of our uncle-charlie-of-blessed-memory) an' got to meet our newest cousin: we gif you . . . (drum roll, please) . . .
CATO 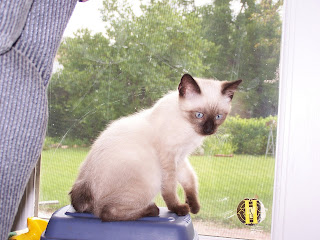 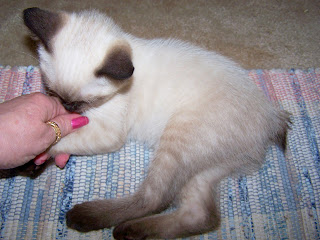 he is a dimple-rumpy manx wif siamese markings. he has just a ittle bunny-fluff stuck on behind. it's really just the outside of a tail, wif no bone in it! an' his hinder legs are taller than his front ones, just like manxes should be. he sorta bunny-hops, too, but it sure don't slow him down--mom sez he's a li'l ball of fire when he plays! 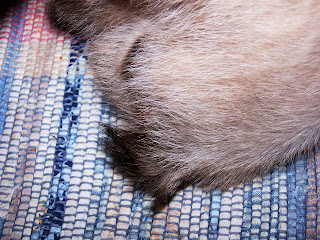 you kin see inna top picture anna bottom one that he has some tigery-stripes comin' out on his legs an' face, so it'll be fun to see what he looks like all growed up. he's a pretty handsome feller already! 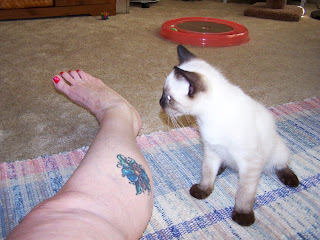 as he walked past mom's leg, he stopped an' hopped sideways in surprise when he furst noticed her tattoo! he sniffed at it an' patted it furry tentatively a couple of times before deciding it was nothing he wanted to play wif. (we will gif snaps to anycat who can identify the style of mom's design.) (an' no, cousin pam an' miss ginger, you can't play, acause you already know!)

cato is also furry s-m-a-r-t, an' auntie joni is prolly gonna haf a pretty lively time wif him in her life. an' here she thought she was gonna haf a nice, quiet retired life;-D

you kin see inna bottom picture that he has one of those ball-in-a-racetrack-ring toys--well, even though he really likes it an' loves to play wif it, that's not enuf fur him. he picks up his ofur toys (like the spiky jingle-ball we sent him) an' takes 'em ofur an' drops 'em inna racetrack, an' waits for THEM to go around, too. so far, he's been disappointed, an' we feel sorry fur the li'l feller--if he's smart enuf to figger out that it might be possible to make stuff to go, he oughta get his wish!!

if monty sez it's OK, we's gonna post his picture inna monty-q contest, even though he don't bloggify, just so you can all see how cute he is!!
Posted by Meowers from Missouri at 5:58 AM

that's a nice tattoo, but we doesn't know what the design is called.

Ditto what the Meezers said!!! Oh cooollllll!! Please come and join us at Simply Siamese- we'll introduce you.

WHAT A BEAUTIFUL KITTEN!!!

Oh Cato! So cute! I must lick the little head...

Oh my paws and whiskers! What a cutie!!!!

Cato is such a little cutie!

What a little sweetie Cato is. We don't know what the tattoo is but it looks like a pretty flower with a jewel in the middle.

Hehehe he sure is cute. I wonder what happens when he gets alarmed, does he get a pom-pom butt?

Cato is mighty cute ! A Meezer Manx! How about that :)
Purrs Mickey

What a cutie Cato is and his little tail is so sweet!
Your FL furiends,