mom set out some honey-mustard dip inna li'l cup stoled liberated frum a restorant for her chicken nuggets, an' the nuggets weren't cookin' fast enuf fur iggy. so here's the result of what happened when her back was turned: 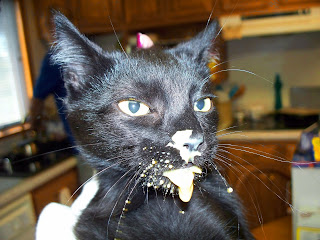 even as he felt her paw wrapping around his scruff, he dove still deeper into the little cup as if to get as much sauce as possible before being hauled away. an' once she'd grabbed him, did she ask dad to hurry up an' get a wet cloth to wipe his poor little face off? oh, hell no. she yelled, "QUICK!!! GET THE CAMERA!!!" they was laffin'!!! we tells ya, a cat can't get no respect around here.

after the delayed wiping off, he sat on the table an' kept on lickin' an' lickin' his chops, an' they laffed at that, too. then, like the big, dopey bean she is, she left the li'l cup right where it was, an' went off to post this barrassing picture. strangely, igmu din't touch it. just kept lickin' his chops. an' lickin'.

mom sez that was hot sweet mustard sauce an' flames oughta be shootin' outta iggy's butt any time now. we'll keep you posted. or not. you may not WANNA know.
Posted by Meowers from Missouri at 6:00 AM

MOL! This picture is too funny!!
Sounds like our mom, first thing she'd do is grab the camera too! Hate to miss a kodak moment like this!

What an adorable picture!!!! Have the flames started to shoot out his butt yet? Too funny.
Cindy

you GOTS TO post a pikshur of the flames shooting out of his butt!!!

That is a very funny picture. We suspect our mum would take photos first and ask questions later too.

So funny! Yes, get the camera before doing anything!!!!

That is SO something our Mom would do, being the scrapbooker she is! What a darling and hilarious at the same time picture! Way to go Iggy!!!

Hopefully she won't be there taking pics of the flames coming out of his butt! LOL

Hahaha, our Mom would do the same thing - it would be camera time indeed! I hope that Iggy is OK with those hot flames!

P.S. Willow and I loved your snuggle picture from yesterday. That's exactly what we were doing in bed last night, right in between our mom and dad! Mom says we don't need a heater on yet either!

You look like you liberated a lot of it!

Let's see, cats don't have a sweet tastebud so did you think it was cream? Did you have a pretzel to go with all that mustard? Hope you don't have any side effects from your snack...

Now that is one great photo! Did you like the taste of the mustard? I am not sure I would like it.

Oh Iggy, you are such a silly-billy!

Nitro, you have taught your apprentice well...

Iggy, anyfing beans is eatin should be FOR KITTY. Efun if dey say it's not for kitty, dat ends in FOR KITTY. Gotta try efurryfing once... or twice.

I gotta admit, it's a funny pictor.
Purrs,
Victor

Ivan and Izzy from WMD said...

OMB! I fell over laughing!

Top quality work there young Iggy! Just hope your bum survived ok. I'm sure it will fine. Our Mum is cackling her head off at this picture.

Get the camra! HA HA! Yer mom kraks me up!