did you hear that? 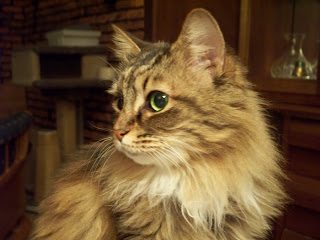 we all know that kitties sees an' hears stuff that beans don't. like us--sometimes we kin see the cats-who-came before acause they had so much fun in our house that they likes to visit from the bridge to see what's goin' on or make sure efurrythin's ship-shape. we even plays THoE wif 'em.
an' sometimes we kin see the beans that used to be (even miss debbie next door has done that while cat-sittin' us).

but xing is makin' mom wig out--she's watchin' solid walls. an' pictures. an' the woodstove. an' the ceiling. you know, places where a bean or a kitty would nefur be. it's like she's waitin' fur something else to pop out, an' mom's worriet what it might be! xing's not tellin', an' akshully, we're not sure she knows either. she's a such big feather-brain an' more'n a little spacey, so it wouldn't surprise us to find out she's hearing paint talk to her!
Posted by Meowers from Missouri at 6:00 AM

Xing has her secrets! When my mom is home alone, I think it is very funny to suddenly tense all up, stare out the window and growl a bit.

Good for you Xing! It's fun to mess with their minds. I do that too.

I did that sometimes :)

Hester was the wig out Queen in our house. She adored Rudy(who also came Before) and would play THoE with him after he went to the Bridge. Then, after she left us, she would show up every now and then, mostly to thwap the dam dog. No matter where we have moved, all of the ones who came Before have come with us. Mumma and Dady are used to it, but it wigs out visitors.

Mumma loves it when they visit.

Love and purrs from Meepsie, Smokey and Old Mumma Jan

Got to keep our humans on their toes. We can't be taken for granted!

We do that too. Our dad plays poker on Friday nights so mum is home with just us. I,Flynn, will be asleep on the computer desk beside her, and Eric will be in the recliner or on the bed, but wherever he is sleeping, he can't see us. Suddenly I will sit up and stare at the kitchen door and when mum looks around, Eric has come out and is staring at it too. That scares the crap out of our mum! We don't act scared or anything, we just stare.

Maximus Spittimus advises that he hears all sorts of weird things.

I must stress that I deny that any eminate from me.

We had no idea paint can talk. Maybe that's why ours is peeling. It has talked TOO MUCH!

Xing you are so beautiful and now, so mysterious! It is important to keep your Mom a little bit edgy, as this ensures you have her attention should you need a small snack or some petting.