i am here today to tell you about my rotten boycat brofur, nitro. 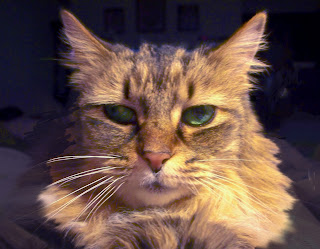 on caturday, i was sleepin' on My Mama's lap inna livin' room. just sleepin', not wigglin', not wavin' a paw, not stretchin', not nuthin' but sleepin'. edmund jumped up an' layed onner left arm like he allus does; he doesn't bofur me much ennymore except to stare a little when he first gets onna chair. then i hisses at him to remind him that I am the LadyCat, an' he jus' squints an' turns away an' gets comfertable. sometimes i even let his furs touch mine, because he isn't lookin' at me. i know i sed i was gonna talk about nitro, but i mentions ed acause he is showin' signs of Learnin' Manners. My Mama sez it's just that he's gettin' to be an oldguycat an' doesn't wanna invest his energy in fightin' ennymore, but I believe it's my Good Influence. i will sivilize these boycats if it kills them!

howefur, things climbed into the handbasket when that fathead nitro jumped up onna footpart of My Mama's recliner chair an' layed down inna loaf position. an' he stared at me. wif great big wide-open eyes. an' din't blink. so i stared back. My Mama told him he hadda behave. he stared. i stared. his big fat right paw crept up ofur the blanket fold. i growled. he stared. i stared. My Mama told him to geddown. he din't lissen; he stared. i hissed. his ears airplaned, my ears airplaned, an' then the fight was on. on My Mama's lap!!!!

i was howlin', he was growlin', My Mama was shriekin'. we were grapplin' an' hissin', rollin' an' kickin'!! My Daddy got up outta his chair an' started to come ofur wif his hands extended, but My Mama hollered, "holy [bad werd], don't git in the middle of THAT!!" then an earthquake struck, an' nitro flew off the chair, an' i scrambled ofur to the side table, tremblin' an' hissin'. (My Daddy sed it sounded like a snake pit inna livin' room.) My Mama picked me up an' held me close an' talked nice, so i calmed down but kept hissin' at nitro acause HE. WAS. STILL. STARIN'. from his perch behind the other chair. so My Daddy lobbed a boot at him, an' he finally ran into the kitchen. (nitro, not My Daddy.)

finally, My Daddy opened the door to my suite of rooms an' i ran as quick as i could to the safety of my heated, hooded catcup, an' i din't come out again all day. i'm sorry i punctured My Mama a very little as i took off for the floor, but she nefur clips my hind claws so it's really her fault. anyway, i'm sorry.

so now you see what i hafta put up wif. i don't wanna fight wif the boys, i just want them to leave me alone in sole possession of My Mama's lap sometimes. is that so much to ask??
Posted by Meowers from Missouri at 6:00 AM

We are sorry your throne was usurped by a ruffian street urchin! We would retire to the suites, too...

OH BAST Xing!! We's sorry it gotted nasty!! We's sorry your the mom gotted punkshured. Um, does she not clip your back feets clarws 'acause you doesn't let her? even so, you're right, it's her fault.

Nitro, why does you stare at Xing? Do you think she's that pretty that you has to stare at her alla time?

Oh Honey...I so sorry. And for your mom and Dad too. Nitro...please use this as a learning experience. DO NOT STARE! Manners! Manners at all TIMES!!!

What an experience! That brother of yours is quite the lad, huh? One day you'll teach him some manners though. These things just take time.

We're a little worries about the earthquake part. Is that New Madrid fault revving up again?

Xing, do what May Ling does: tuck your head in the mommer's armpit and all the Bad Brothers go away...it's magic.

Andrea and the Celestial Kitties said...

Awww you poor girl! Leo and Star take turns initiating the Stare of Doom on each other... It's not fun at all. We hope he learns some maners soon, poor girl.

I feel bad for your mom, that fighting on the lap can be painful! I don't know which blog is was that someone suggested pebbles or coins in a can so you can shake it to stop them fights, but the last time we had one, I grabbed the closest thing at hand, a bottle of advil and shook it! it worked, the kitties took off like shots in opposite directions! Perhaps your mommy should keep something nearby just in case. Might help prevent a few punctures.
Could try one little shake to disrupt stares, and a few big shakes to stop fights?

Poor Xing! Nitro has no manners at all. It is very rude to stare.We know you didn't mean to puncture your mum, but it does happen when you leave a lap in a hurry.We hope she has recovered.

Good thing your dad listened to your mom. Never ever get in the middle of a fight. The human will get the worst of it.

We have Percy here. He gets in those staring moods and Rusty does occasionally. Wonder what's wrong with guys?

From Sassy: I feel your pain, Xing. My sisfur, Trouble stares at me all the time!

From Sassy: I feel your pain, Xing. My sisfur, Trouble stares at me all the time!

Holy cow! Its like our house! Last time there was staring, Julie bit Mica Moo and Mica Moo spent 4 days in the hospital and almost died from the infection. Goes to show you what happens when you don't brush your teeth!

It can be hard to share a human's lap sometimes and Kizzie has to share mum's with a small human, which may be even worse.

Allie: oh I so TOTALLY sympathize! Brothers can sometimes be The Scum of The Earth! Seriously! Such BRATS!!

FaRADaY: Oh Allie, get over yourself. I only nommed on your pretty pink collar a TEENSY bit. An' it's the part under your chin anyways. NO ONE will ever see it. REEEALLY.*eyeroll* GURLZ.