one morning in the long ago, She was late leaving the house for work, so she hurried off in the green machine. as She got near the office, She saw a little black kitty with a white bib, wandering in the center of a busy intersection. She made the machine STOP! and She dashed out into the traffic to scoop up the kitty. it scrambled up Her front, perched on Her shoulder and purred like a swarm of bees into Her ear as She got back into the machine. then it climbed down onto her chest and clung there, purring, all the way to the office. it was a new office, but an old job. they were in the process of moving Kolar's computer-building business into a larger space, and there was much to do.

when She went in the front door, the boss was right there. "whatcha got?" he said. "a kitty; i found it in an intersection." "whattaya gonna do with it?" "i dunno. we're already maxed out at my house on cats; the old man will holler if i bring home another one. i thought maybe somebody here might take it. or--maybe it could be an office kitty?" *fluttering eyelashes madly*.

"hmmmmmm. yeah, maybe it could be an office kitty. we'll try it." what a nice bean he is!!! he lives out in the country, and his wife is hostess to a jillion-cat herd that lives outside, so he is quite used to kitties, although he prefers *shudder* big ol' hairy d*gs. 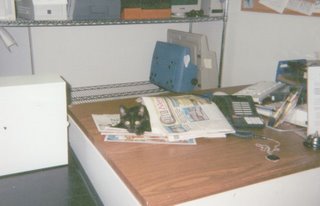 anyway, soon the other office lady, janet aka "nanet" came in, and inside of an hour, the kitty had a name (KC for "kolar cat"), a bed (in a drawer, with a towel to sleep on), a collar, food, water, bowls, a litter box and scoop, toys, and a scratching post. things appeared like magic! everybody (except one grump) had kitties and brought or bought stuff for her. our mom took her for Her shots and ladygardenectomy, and nanet took her home to visit with her two kitties on weekends, so she was never locked up alone for more than overnight. our mom and nanet referred to themselves as her "co-mommies".

so KC began her career as an office cat and official greeter. she was a natural--a friendly, interested, well-mannered (N*E*V*E*R used her claws) kitty, very purry, she would come up to people bringing in machines and strop their ankles or jump right up onto the counter to see what was what! nobody EVER got stinky about her being there, and most asked for her if they didn't see her right off.

after about two years had passed happily, an employee from a remote office came to town for a seminar and stayed in the upstairs loft of the building. while he was unloading his suitcases, he propped open the door and out she went unbeknownst to him. the next morning, our mom was heartbroken when they could not find her. she'd been known to hide in cabinets and other deep, dark places, but even crunching her favorite toy, a crackly tinfoil ball, failed to bring her running. they figured out what must have happened, and She sent her boss(!) out to drive up and down the streets to see if he could find her--either way. (i told you he was a good bean; and he also knew very well not to cross a woman whose cat was missing.) 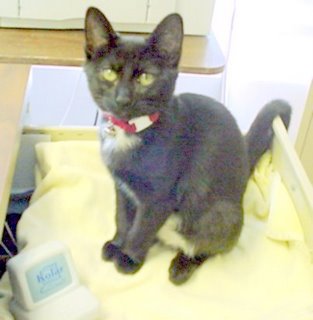 She called the businesses on either side of Kolar to alert them, and with a heavy heart, called nanet at her new job and gave her the bad news. soon there were fliers posted nearby, with a picture of the kitty. all day dragged by, and mom cried all day long. sat at Her desk and leaked quietly, didn't care who saw, waited on customers at the counter and answered their questions about why. some of them even came 'round the counter to hug her and assure her KC'd come back.

all night, She cried some more, and then some more. next day, same thing. sadness. gloom. leaking.

on the third morning, as mom was opening the door at work, the phone was ringing. the lady at the business next door wanted to know if the kitty we were looking for had a white chest and red collar. scared that they had found her dead on the rough hillside behind the building, She trembled but answered, "yes". "well, she's locked in our bathroom and she's about to tear the door down. for goodness sake, come get her! one of our workers found her in the bed of his truck this morning!!!" mom's heart sprouted wings and flew her right over the big fence and onto the porch next door. the lady laughed with her as they saw not one, but TWO black paws scrabbling anxiously out from under the bathroom door.

we don't know how long she'd been in the bed of his truck, how she got there, or anything else. all that was important was that she was home. mom hugged her until she squeaked! and scolded her, and hugged her, and cried some more, but happy tears. then She called nanet and shared the big news, so there were TWO bawling, happy women in springfield that morning. mom and nanet agreed that something had to be done to prevent that happening again.

so at lunch time, nanet's sweetman, alan, came and picked little KC up and whisked her away to her once weekend, now furrever home. nobody--not mom, not boss, not anyone--EVER wanted to go through THAT again, and gladly gave up seeing her if it meant she would be safe. so mom had visitation rights and went to see her now and again. KC's still living there, happy and spoiled rotten, with her brofurs.

that was three years ago. folks who come in to the office still ask, "where's the kitty?"! i guess she made quite an impression. =^..^=
Posted by Meowers from Missouri at 6:39 PM

What a sweet wonderful story! We love to hear about how people can band together like the folks in this office did to help a homeless needy kitty. We are so happy she go to go home with Janet!

Smeagol and Strider, Mystery (Sunnin' at the Bridge) and Gizmo too! said...

We're so furry happy the story had a happy ending and that KC has her furrever home! Mom has a cat at her office, 'cept it's an outside kitty and Mom hasn't been there long enough for him to let her pet him, but maybe someday he will.

We voted in your poll, and since it includes outdoor meowers, we were in the 8+ category because Gizmo just brought her four kittens home! Plus their dad kitty and another kitty come by to eat sometimes. Mom's all worried now 'bout what she's gonna do with the kittens, and also 'bout gettin' Gizmo fixed (we don't get it, she's not broken as far as we can tell). Mom's gonna have to catch Gizmo first, though!

What a great story! There's a cat who lives in the bookstore where our humans like to go. I think that would be a fun place to live because of all the climbing and hiding opportunities. Businesses should have cats. It just makes the place more fun and friendly. But not Cocoa. No business should have Cocoa. He puts the bitey on paper.
Midnight

what a wonderful story! Mommy always gets a big smile when she goes into a store (like an antie-k store) and there's kitties there. She always goes back 'acause she figures they're nice people.

Awwwwwwww....What a lovely story. My mum was getting all teary at the happy ending. She likes shops that have resident cats too. I don't think a kitty would like to live in the school where she works, though, too many noisy little people with poking fingers! Mum used to keep a tank of African Giant Snails in her classroom but that's hardly the same thing...

How touching! That story had Mom all sniffly. We're glad that Kolar is happy now. Maybe the company should rescue another kitty since they're good for the customers.

That is such a cool happy ending story. Not like some stories about kitties whose feet get outside. My peeps say "sorry Eddy, the world is not ready for you, so you get to stay inside." Guess that's not so bad.

Hey, what is an "intersection" by the way and how did the kitty get into it. I don't even want to know what... I betcha it's something like what happened the day I went to the VET and he took away my testicles.

Good to hear from you by the way. I'll check back in a few days.

KC and the Giggleman Kitties said...

Absolutely loved the story about your little KC. I read it to my KC and Missy, who agreed it is a very neat story. And such a happy ending. Thanks for sharing with us.