which, we begs to remind you, WE din't get to go on!!! we din't even get a t-shirt.
the furry furst night in chicago, they went to eat at a panera bread place, an' outside the store was this fountain--wif its own fevver factory! 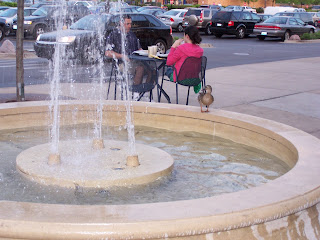 here is a close-up of the fevver factory. we dunno why a sammich place would want to grow fevvers. they din't see any kitties workin' inna restaurant! 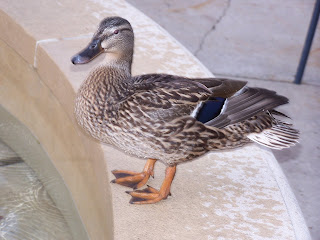 mom said she nefur saw a place where you could rent a movie from a machine--this one was outside the grocery store. 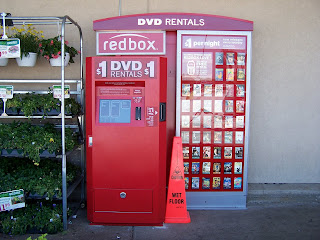 this was a beauty parlor for woofies near gram's house--"the yuppie puppie". the picture is blurry 'cause mom was tryin' to take the picture while dad was driving. 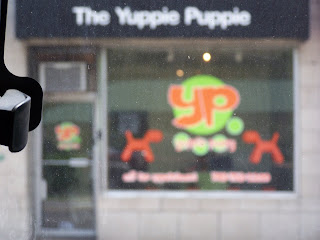 this is a mail box outside a bank near gram's apartment. it's painted to look like a character from mom & dad's favorite movies, the furst star wars trilogy. 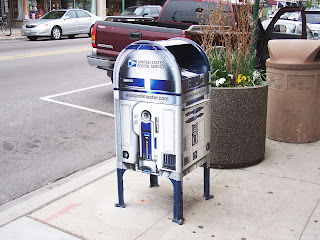 here's granpa. he looks pretty good for bein' 94 years old. that's like squillions an' squillions of naps!!! (an' he LIKES to nap; we declares him an honorary cat!) 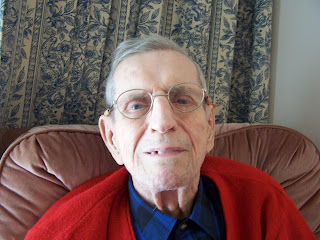 here's granpa's paws. they gots no fur an' hardly no skins! but his claws are furry pretty, an' up until last year he pawdicured them himself! now he doesn't see too good. 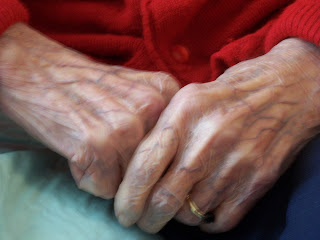 here's gram, mom, auntie marilyn, an' granpa at the ice-cream-n-cake celebration. granpa ate two pieces of cake an' four dove ice cream treats. he doesn't miss too many meals--also, an honorary kitty trait;-) a couple of weeks ago, a lady came to take him to the dentist, an' he wouldn't leave until he'd gnawed his pork chop bone all clean. that's his favorite meat, an' they don't get it furry often, so she hadda wait. we's sorry it's a little fuzzy, but dad's not familiar wif mom's camera. 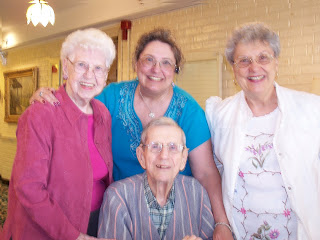 spidey-man was waitin' for mom & dad at burger king, to see if they were good beans or bad beans. they musta been good; they got their coffee wifout gettin' webbed. (mom sez this picture's for YOU, daddy dave.) 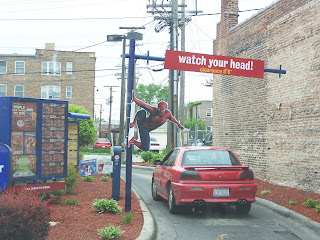 this great big fire was 12 miles away from gram's apartment building. the smoke was so big, they could see it in indiana, an' the smell was smellable (even to beans) ofur in cicero, where mom & dad stayed wif auntie toni! 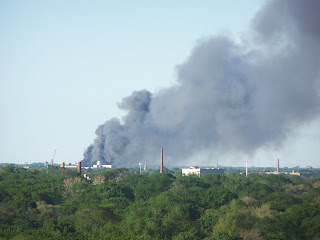 mom took this picture (an' the next one) back in december when she went to see gram for her birthday. but they got to go to the restaurant again this time. dad likes their liver dumpling soup an' roast pork an' bread dumplings wif gravy. we hasn't nefur got to taste them, 'cause there aren't any bohemian restaurants in springfield. an' we prolly wouldn't get any, anyway--mom & dad allus lick their plates clean when it's bohemian foods! 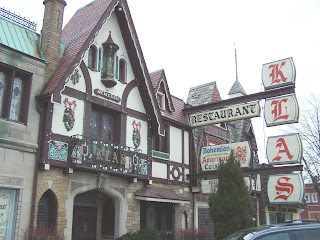 inside the restaurant, it's real old-fashioned european-y. a long, long time ago, a local man whose business card said he was a "used furniture broker" had special rooms inna upstairs where he an' his friends played cards an' ofur kindsa games. auntie marilyn went to high school wif his nephew, vince. we dunno why that's special, but mom an' dad are impressed. the man's name was al capone. 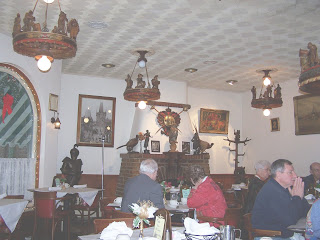 these are some cousins (jasmine an' mocha onna blanket, an' marla onna chair) that we've nefur met. it's nice to see them an' get a better idea of our extended fambly. mom & dad & gram & auntie marilyn went to marla's mom's house for "coffee and" one day. that means a little snack in the middle of the day or after supper, with coffee to drink and pastry to eat--mom took a little video there, but hasn't got it ready to post yet. mom & dad brought some home goodies from a bakery there, an' the little pies called "kolacky" (ko-LAHTCH-key) are yummy! 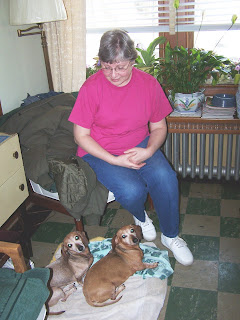 mom an' dad had a really good time visiting an' making sure the old folks were perkin' along ok, but they were really glad to get back home. an' we even missed 'em a little bit, too. we din't make 'em suffer by ignoring them furry long when they came in the front door, eifurr. (mom: yeah--because it was suppertime when we got there!;-)
Posted by Meowers from Missouri at 6:01 AM

These were really great pictures! My Mommy loves Chicago! Did you know that the McDonald's across the stree for the Hard Rock Cafe, deliver's pizza, too?! And Panera, Mom's second home! She abso fabso loves it there. When she lived in Tulsa, she and her girlfriends would meet there every morning after they dropped their kids off at school. Mommy misses Tulsa very much but likes living in Arkansas, even if there isn't a Panera.
I'm happy that your beans had such a great time! Your family looks like a great, happy bunch!!! I would love to meet your cousins. Mommy won't let me have any more dogs cause she says she'd be the one to have to clean their poop everyday before the kids could play in the yard.

Wow, 94 years young. What an accomplishment. Out Mommies Grandmother lived until she was almost 99.

aarrggh! we're tryin' ta admire the fev-ver an the Lady keeps scrollin' down ta look at the ceiling an fixtures in the place where Al & his furrends usta play card.

Your family looks so nice! Your granpa looks very young for 94. And I like his red sweater, too.

That is a funny fev-ver to live in that little tiny lake.

I am glad your mom and dad had a good trip to chicago.

Yoo guys is furry lucky! Yoos gots a grampa and gramma dat are furry yoong fur being so old. We haf a grate uncle dat lifs in Cicero too! Mom hazent been der in ages. We reely liked looking at yoor pikshers, thanks!