how we spent our 4th of july

in durance vile, that's how!!! there was no flag-wavin', hot dogs, mom an' apple pie. was unamerican, we tells ya!! it was an apocatlypto!!

oh, ok, there was a flag wavin'. there was a mom, all right, but she had shampoo in her hand. there was a hot dawg, but she was dipped. apple pie? try pills!! an' for us innocent kitties, there was incarceration, plain an' simple. 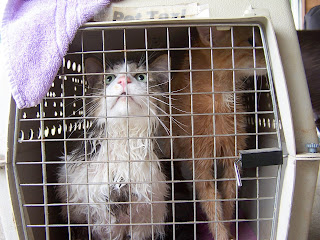 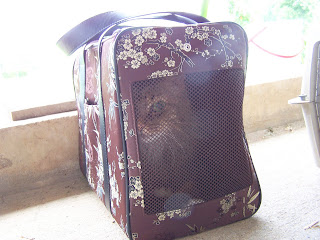 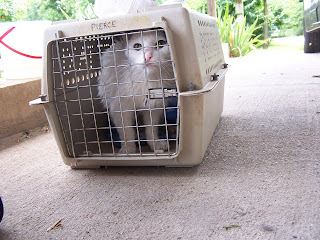 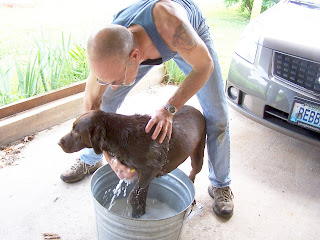 it's all them darn fleazers' fault! they crowded in an' brought alla their relatives last week, so mom 'n' dad got some organic stuff to sprinkle onna carpets an' furnychur, an' to drop on our necks acause mom had been worryin' more an' more about chemicals an' kitties. but we turned into greasy, itchy messes, an' the fleas LOVED the organic stuff. they liked it so much, they sold it at their circuses for treats! we counted five circuses and 11 carnivals!!!

so today, the house got rug-sucked even in places there wasn't rugs, an' the slaughter of the fleazers began. we all got capstar pills, an' the fleazers drove us WILD in their haste to get offa us before they died; not many made it out alive.

xing (who has a really BAD flea allergy an' was all scabby) an' the geezer cat got baths wif a oatmeal soap in it. more fleazers perished. them two got packed into PTUs an' dumped onna carport.

then ed & nitro got dipped and stuffed in their PTU. still more fleazers became ex-fleazers.

cocoa got dipped, but SHE got to go run out inna field an' roll around. no PTU for her. unfair!!! she's a dawg, for bast's sake; she's a lesser being--an' she went free! where's that kitty constitution? there oughtta be somethin' in there about persecution!

then they put bombs inna house (but we din't hear no loud noises, an' it din't fall down), an' we languished in our PTUs onna carport for almost three hours! if we hadn'ta been soppin' wet [mom's note: we toweled 'em off, honest, we did!], we coulda took several naps in that time. but NOOOOOOOO. we hadda work, work, work to get ourselfs presentable again. an' after we FINALLY got back inna house, they made us STARVE a whole half hour before giffin' us our just desserts. an' main courses. an' by golly, there BETTER BE QUALITY TREATS later!

although it was kinda nice sittin' outside, chatterin' at the birdies up close, seein' the damdog make a bigger fool of herself by chasin' her ball, an' watchin' dad usin' a tennis racket an' a baseball bat to do battle wif a big ol' bee who din't wanna share carport space wif us. we could get useta that "outside" thing, if we din't hafta be locked in our PTUs. dad laughed at the notion of a stroller, an' we've tried the halter an' leash thing. maybe we can get them to get us a tent! 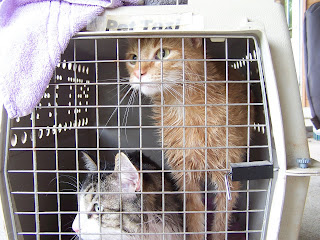 anyway, that's the story of the inglorious fourth at our house. we hope none of you endured such a day, but had a safe, happy celebration wif yer famblies!
Posted by Meowers from Missouri at 5:25 AM

OHMYGAWD, what a horrible, horrendous, horrific, helacious (is that a word?) day!!! We are sure glad we weren't anywhere near Missouri. Show Me? Guess that'll Show You, you flea-orrible, flea-orendous, flea-riffic, flea-acious furs! Fleas Be Gone.

Holy moley, that was an awful, terrible way to spend Independence Day!!! We sure hope those dang fleas never, ever come back and spoil ANY day for you! And we certainly feel that you all deserve lots and lots of treats afer going thru that ordeal!
Purrs and headbutts,
Sabrina, Sam and Simon

oh my cat. we has had baths before but not cuza fleas. We feel so bad for ya'll. and to be locked up in the ptu afterwards and not able to hide to dry in peace...

Wow. Hope you never have to go through THAT again.

Good thing it wasn't winter, though!

ohmygosh! That's just horrible!! We do not care for fleas at all!! Sorry about the PTU, but your Mom Dad waged an all out war with them!!!

eeeeeeek! poor Max got a bath when he came here and we were scared we were gonna be next, but then all of us got the evil chemicals on the backs of our necks and that was that. we feel so bad for all of you!

What a horrible way to spend the holiday.

I hope you all didn't have to be bathed too...

That sounds like a terrible holiday! I feel sad when I see kitties in the cage cause that's how I feel when I'm in my cage, even though I don't complain very much.

That organic flea-stuff sounds like bad news, we hope no other kitties are going to try it, whatever it was.

PS. Ms. C had to type in "ewok" for her word verification, what is that?

Oh NO!!! That's not much of a celebration! You should get lots of treats for putting up with that!

OH MY D-O-G HOW FRIGHTFUL!!! I am shocked to the core by this tale of horror and suffering. I hope you are getting SO MANY TREATS for all that!

(and I really hope the fleas are gone after all that!)

Wow, there sure was a lot going on at your place yesterday. We can't let Jan read this post or she might get some bad ideas from it.

All we can say is dat dem damn fleas better be gone fur good and yoo better haf gotten some really good treats after alla dat.

I think your beans need to be reported to the authorities. For that to be done to you all in the first place is just beyond terrible. But on a holiday, and not just any holiday, but one that stands for the birthday of our INDEPENDENCE! On the day we declared ourselves FREE from tyranny? Some bean isn't thinking clearly.

We wish you would have teleported over to our house to dry off at least in style amongst friends. We would have gotten out our puffiest softest towels and placed them on the sofas and beds for you to rest on. You poor babies.

And fleas stay away from my meowing friends in Missouri! Or else! Oh and stay away from the damdog too because they consider him to be family, I think.

Will Xing heal quickly? That must be horrible to be allergic to those creeps.

We'll come back and check up on your parents to see if they're giving you nip parties and lots and lots of treats to make up for the errors of yesterday.

What a way to spend your holiday. Hope you send all of the fleas packing.