certain cats (ed) haf pointed out that nitro has been featured onna blog WAAAAAAAYYYYYY too many times lately, so here is our own ed, caught inna act of pineapple leaf nomming. 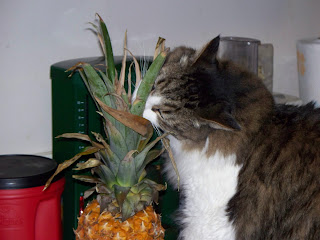 howsomefurr, as soon as the flashy box flashed, he immejitly began actin' as if he was only smellin' the leafs. but the leaf closest to you, gentle viewer, tells the tale!
mom took it away frum him after the photo shoot acause she was afurraid he'd cut his mouf onna sharp edges if he kept on nomming. an' later on, dad beheaded it, skint it, an' chopped its innards into li'l pieces, which we din't any of us like AT ALL!!
Posted by Meowers from Missouri at 5:00 AM

We've never had the pleasure of pineapple leaf nomming! Looks like great fun!

Ooooo, dat is just what Miss Camille Suzanne does all the time! She purr-ends dat she is bein' good! Did the pineapple leaf taste good...inquiring minds wanna know.

Hmmm...I've smelled those before and they seem kinda picky...

what a cute blog, wonderful pictures

Ed, you are very silly to eat piney-apple leaves!

We've never had pineapple before...but I like a good leaf to chew on!

(pee ess. thanks for the purrthday wishes!!!)

We could see you were only sniffing the leaves Ed. We think Not Mee came in just before and nommed those leaves and you got the blame.

You make Pineapple leaves look very nommy. Sometimes a kitty just has to take the blog spotlight back doesn't he?