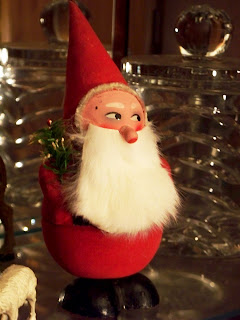 our croatian great gramma bean giffed him to mom when she was only 7 years old (mom, not great gramma), so he's more'n half a century ancient. he is made of paper marshay an' his outfit is flocked on. he's holdin' a li'l sprig of somethin' that's sposd to be a catsmas tree, an' his top half twists offa his bottom--he was filled wif chocolate candies when he was new. yew kin learn more about the good saint here an' here.

mom allus did saint nicholas day treats fur our boy bean, dash, as he grew up, so he knew something most kids inna ozarks din't. when he was half-growed an' studied german language in school, one winter morning the teacher (herr zahn -- mr tooth) told the kids (in german) that whoefur took off their shoos an' put 'em outsidea the door would get a surprise. alla the kids looked at dash like he was goofy while he did it, because some of them understood the instructions but they din't think they made any sense, so they din't do it. but he did it acause he knew that that's what kids in europe would do the night befur saint nicholas's day. then the next morning they would find the little treats that the saint had left fur them. so out inna hall was an older student wif a bag of candy--an' since dash was the only one to show up, he got the whole thing!! mom was furry proud for him!

Lol, what a great story. In the Netherlands Saint Nicolas and the putting out of shoes is a great tradition. The past days you would find lots of little childres shoes in supermarkets too, waiting for a sweet surprise.
(And on television several networks had their own daily Saint Nicolas news in the past weeks)
Have a happy Saint Nicolas day.

That a good tradition you have! Happy St. Nicholas Day!

We loved this story!

What a great story! Your St Nicholas
is very cute!

Sniffie and the Florida Furkids

Well then happy St. Nicholas Day to you too!

Happy Saint Nicholas Day to all of you. Our mum sent your mum an ecard last night. Can you check it didn't go in the spam folder.