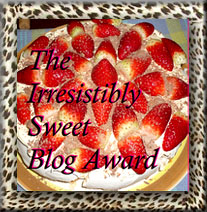 our good buddy, clooney, gifted us wif this nifty award--fur which we thanks him heartily!--an' now we is spo'sd to tell seven things about us. well, if we told seven things fur each of us four, we would be here for quite a while. so we will tell fourteen an' mix it up:


XINGXING:
NITRO:
EDMUND:
an' to round out the list, here's something about a couple of the cats-who-came-before:
UNCLE EEKER:
MOUSE MCNASTY:
now we's spos'd to pick more kittehs to take part in this, but we haf come to the game so late, we can't remember who's done it an' who hasn't--so if the shoe fits (giggle), wear it, an' let us know!!
Posted by Meowers from Missouri at 6:00 AM

one of Fae's humans said...

twaz really interesting finding out more about you all, thanks for sharing! also, congrats on the award!

@Nitro
Iggy is a loud-mouth too! he goes around making all kinds of noises all the time. maybe you could explain to me why he does this....? he refuses to even acknowledge that he does it!

@Iggy
it's too bad you're not a lapkitty because lapkitties are awesome! :)

I loved reading about you guys. These awards are so fun acause we can learns so much more about our fur brudders and sisfurs everywhere in the CB.

wow, that was lotsa good informashuns. if our dad had hit our the moms toes efen once, he would not haf hands left - just bloody stumps.

Concats on the award! Wow, you guys are REALLY interesting! Seriously. We enjoyed all the info! We won't remember it, but we enjoyed reading it. LOL.

Your answers were so cool! Congrats on the very nice award!!!

WOW! You guys are srsly interesting! Nitro, we'd love to learn the hairball-a-day trick, do you have any pointers? Just think, thirteen hairballs, every. single. day.

Congratulations on your award!

Hooray for your awards ! and your answers is cool, Lots of thing made you guys so unique !!! Like Uncle Eeker, I never heard any cat loved the garlic smell !
xoxo

Concats on your award! Those were some seriously interesting facts about you! I loved reading them and getting to know you better.

Congrats on your award! It sure was fun learning more about you guys.

Meowers, you folks rock! Thanks for purr-ticipating and being great sports! Ok, as others have said you are seriously interesting over here and very unique! Loved all your facts. We think all your names are very unique and awesome. We wonder what's goin' on with Edmund and the human litter box...interesting stuff but then again, he's a character so what do you expect? Have a great week kitties!

Are you paying more than $5 per pack of cigs? I buy all my cigarettes over at Duty Free Depot and this saves me over 70%.