oh, great bast!! yesterday, our buddy miles ofur at meezer tails posted about kentucky fried chick-hen, wif its elebenty herbs an' spices. that reminded our mommer we hadn't had enny in so long that igmu din't even know what it was--an' HE's been wif us two years this month!

in fact, the post did what is referred to in some parts of the South as: it done flung a cravin' ON her!! dang if she din't go get some authentic kernel frickin' chick-hen at lunch--the big giant economy size cluck-in-a-bukkit chick-hen, so daddy could haff some fur supper.

of course, she hadda haf some for lunch acause all those steamy hot hevvinly perfumes were pullin' theirselfs up through her nose-holes by grabbin' onto the hairs an' shimmyin' their way into the brain--they just flat took her ofur. even if she hadn't had that cravin' flung on her, she woulda been powerless unner the spell of the smells. once she settled at the table, it wasn't pretty: she scarfed down two legs anna thigh an' several forkfuls of chopped up begebuls wifout even breathin'. i, nitro, got whacked onna head wif the fork no less than three times while i was tryin' to clean up the crums that were flyin' efur-which-way while she inhaled the chick-hen.

finely, she said, "ok, boys, now you kin each haf  some chick-hen." nacherly, iggy an' i lunged fer it an' got a couple more thwacks for our trubble. "dammit, i din't mean you could pick yer own!! lemme pick off some bits that ain't fatty an' then ed kin haf some, too." so while she was pickin' shreds off the bones, iggy saw his chance an' reached in unner her hands, hooked a legbone wif a claw, grabbed it up wif his mouf, an' took off fur the puter room.

it was sure funny watchin' mom bein' tore in haff mentally--if she took off hotfoot after him, she knew the plate wif the pickin's an' bones (not to mention the rest of the bukkit) would get pillaged good an' proper, but then she din't want iggy runnin' wif scissors ... er ... a bone in his mouf, either. she din't even know who to holler at!!! me an' ed MOLd fur all we was werth while creepin' closer to the feast! at last, she grabbed the plate from unner our noses, stacked it onna bukkit, an' bundled the whole thing into the oven as she passed it on the way to the puter room.

by this time, iggy was hunkered down unner the puter desk. she grabbed fur him; he was growlin' at her. he scooted out the side of the desk an' took off around the chair. she followed, throwin' clo'espins at him to make him drop the bone (hah! as if!). he ran back unner the counter, an' when she lined up onna side of the desk to catch him, he went back out the way he come in an' headed fur the kitchen again. all the while she was castin' aspershuns on his parentage an' threatenin' to soak his head inna terlet when she caught him an' then hang him out to dry. he just growled louder, an' wove hisself in, out, an' around the chairleg forest where she couldn't reach him, then took off fur the puter room again. he was right lively!

as she was roundin' the corner of the oven, a light bulb came on ofur her head (honest, we saw it!), an' she reached in an' got a little chunk of crunchies, plunged into the puter room, an' shut the door behint her. we din't see the rest, but iggy tole us later that she waved that crunchy glob in his face a few times an' then very unfairly tossed it just outta his reach so he'd hafta stretch out to get it. when he opened his mouf to grab it, she grabbed the bone, an' it was all ofur. damn them opposable thumbs!!

ennyway, this is all that was left onna bone-- 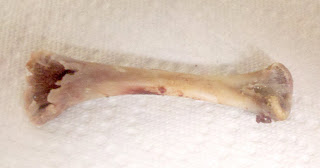 he managed to gnaw off an' eat alla the meat that was left as well as the mooshy parts on bofe ends while he was runnin' around avoidin' capture AND cussin'; that boy can multi-task!! all hail igmu: he may be a indoor kitteh, but he's got the heart of a successful feral!
Posted by Meowers from Missouri at 6:00 AM

Mom says we shouldn't approve of chewing on chick-hen bones, but wow - that is pretty impressive. Go Iggy!!!

IGGY! THAT was a pawesome accomplishment! My mommy has been craving that same thing and I may...may...get a chance!

That was sure some paw lickin chicken!

Igmu I bow to your awesome superiority in the running around wif food in your mouf growling category. I totally unnerstand the power that kernel frikin chick-hen holds ofur you. The mom says there's crack in it.

Oh, BTW, haf you tried the gravy on the potatoes? OH MY BAST

oh an pee ess: the link to your bloggie on the cb site is pointing to a post from last year.

Wow! That sounds really good. We had chicken not long ago too but we did not get more than whiffs and whiffs.

That is a great story! Those eleben spices get us efurry time!

Igmu, we MOL'd our you know whats off!!! You are our hero since we don't get chick-hen anymore!
Purrs and headbutts,
Sabrina, Sam and Simon

MOL We're trying very hard not to laugh, but the picture of your Mom running all over chasing Igmu reminds us of when Mom's Eskie Katie stole a whole chicken!!!

The Florida Furkids and Angel Sniffie

MOL! What a great story! Igmu, you're my hero!

Did you know that when I was a wee tiny kitten of 6 months, I stole a whole 1/2 Cornish game hen right off my mom's plate under her nose! I ran off down the hall and under a futon where I too grrr'd and growled in order to protect MY PRIZE!

Way to go igmu! We haven't ever been given KayFCee but it sounds good. Mum when she does have chickhen makes sure we don't get the bones!

That is a furry clean bone. The cleanest we had efur seen!

ow yum! We like KFC too but we don't get it often. We admire your sharp teeth!