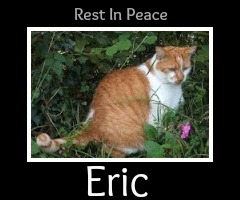 ah, woe. we breaks our long silence to honor our good buddy, eric, of eric & flynn fame. he was a mancat's mancat, brave, floofy, loyal, an' doughty. a supreme hunter, the mouses an' voles inna nearby fields trembled when he prowled. he had his own distinct purrsonality, sweet-natured an' true, allus proud to show his tum. as he was a constant companion to his brofur, flynn, he was sociable an' furriendly. he will be missed mightily in devon an' throughout the werld. lord knows, WE misses him. farewell, our darlin' eric.
Posted by Meowers from Missouri at 9:24 AM

We are crushed and so sad about the loss of dear Eric.

I was heartbroken, still am that our Eric is gone.

Our hearts are broken. We miss our sweet pal Eric already.

We are so sorry Eric went to the bridge.

Thank you for your lovely words for our handsome boy. We miss him terribly, but all the love sent out to him and to us are helping us in our grief.
Jackie, Ivor and Flynn.

Different states have different pay rates for this health care profession. The average registered nurse salary in Missouri is around $77,000. http://techniciansalary.net/registered-nurse-salary-in-missouri/
.

We do too. He was such a sweet boy.