a NEW meniss is come upon us!! beware!!
it has happened here in the armpit of missouri--be vigilant! look around carefully as you as you do your patrols!! maybe they're in YOUR city, too!
we fink it must be because there were so many vishus deers in our fair city last year, the powerful beans sed it was ok to hunt them (hunt the deers, not the powerful beans; although mommer says there are a few bea-- *ow* mommer! whydja swat me????  You don't have to repeat everything you hear, buster.)


ennyhow, as i was sayin' befur i was so rudely innerupted, we thought there would be lotsa ex-deers around here after that pronouncement. you know--that they'd passed on! they were no more! they had ceased to be! they'd expired and gone to meet their maker! they'd be stiffs! bereft of life, resting  in peace (dona eis requiem)! their metabolic processes would be history! they'd kicked the bucket, shuffled off their mortal coils, rung down the curtain, and joined the bleedin' choir invisibile!! you know--ex-deers!!

but NO!! they are so vishus, so tenashus, so heinously determined to annialate the cat population that they even come. back. from. the. other. side!

kitties, keep yer VDR handy ... we allus knew they would come fur us one day, but at this season of peace an' joy? well, what else could you expect from 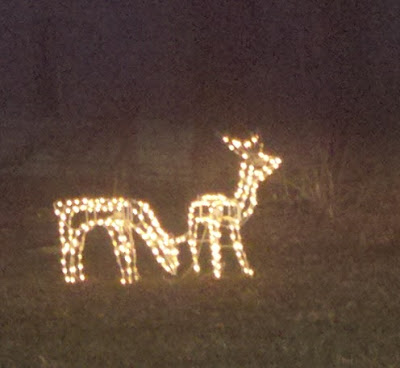 GHOST DEERS!!!
Posted by Meowers from Missouri at 3:02 PM

HOLY COD!! This is an emergency of EPIC proportions...worse than the dreaded (and ever-present) Zombie Menace.
hmmm, we wonder if ghost deers do ghostly poop?

Oh no! Now that is scary. I hope the deer repellent repel them too!

The Florida Furkids and Angel Sniffie

Yikes! Will it ever end??

Oh, we really feel for you there with those ghost deers! We hope you can stop shaking in your paws and have a Merry Christmas. Monday you can worry about the deer again, okay?

Are you sure? We mean really, really sure? Beyond a reasonable doubt sure!
After all, deer this time of year may just be sad 'n' sweet little runaways from the sleigh-yard ...