i AM the mighty hunter 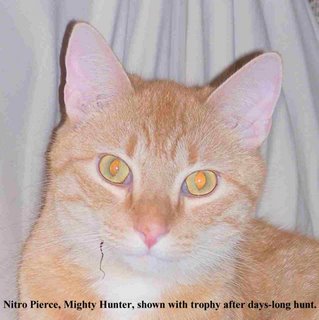 it was the dark of night. not a creature was stirring . . . except for a mouse. i had hunted the wily creature for days, scenting him, tracking him, chasing him. he ran, i ran. he scooted under under the cabinet, i scooted under the *owwwww* (note to self: must remember to duck lower) cabinet. he faked left, my paws were there! he faked right, my paws were there! i biffed him, i baffed him, he nipped me, i hollered growled kitty curses. he slipped under my foot and dodged away. i scampered after him, driving him relentlessly forward. aha! at last, i had him cornered! his eyes were huge--burning coals of terror. he leaped onto my head and dug in, all his tiny claws digging for purchase. again with the biting! i shook my mighty mane and dislodged him, only to see him scurry off in the direction of the living room--it was now or never. i gathered my steel-spring muscles and pounced. a mercifully brief struggle brought his end. i dropped my prey and paid a moment's reverence to a worthy foe. then i ate him.

well, most of him. i made xing get the camera and flash this picture of me with my trophy. since she had bet on the mouse (hah! *pft* that for you, xing), i felt it was a fitting punishment. then i took the trophy to the beans' den and displayed it lovingly about a foot from the door.

at 0-dark-thirty hours, She arose to feed us and entered the kitchen from Her den. She was so impressed when she found the trophy that She called upon Her god to witness the scene. so proud was i!
Posted by Meowers from Missouri at 11:29 AM

Momma got really religious when Mistrie Rose brought her a bat! She got the same way over a gopher last year. I would catch them too, if she would ever let me in the City of The Big Outside.

Mighty Hunter!! What a story, what a fight. Awesome job!

Woooohoooooooooooo! Good job Nitro! You are the big man cat!

Well done, Old Boy! Your narrative was so exquisitely exciting, we felt we were right there, with you, in the chase! And, of course, when presenting the Trophy Piece to Her, to hear High Praise for the efforts makes it all worth while, doesn't it? What Good Sport! Perhaps one day, We can join in on a hunt with you?

Most sincerely yours,
The Royal House of Myres
Queen Emily, Prince Brutus and
Princess Emily

WOW! if only we could have a real live critter to hunt! I've been trying to get Pumpkin in huh-why-eee to send me his birdie furrend to play with, but he did send me some fev-vers so's I can purrtend. if only a little mousie would join us for a little game of chase ::sigh:: the Lady loved your story so much she made the teenagers read it too. in case we effur runs across a mousie, which part does ya eat an which part does ya purrsent ta the Lady?

Oh, Nitro, what a stirring story! I hope to someday follow your ferocious example, should I ever meat... I mean meet a mouse. (Mom says there are mousies in the shed, but that's outside where I don't go)

Oh, Nitro, you make your two legged Auntie so very proud! And I can just imagine how impressed Herself was when you presented her with 'proof', and you did't even make it squishy proof. What a *fine* provider you are.

Special scritches to you, and hugs to Her an Him.

Nitro, you are a formidable hunter indeed. And not a bad storyteller either. We bow to your greatness.

Woah, respect to the mighty hunter. I'm sure your humans were pleased really!

Wow!!! I felt like I was watching an episode of Animal Planet's Crocodile Hunter!!!
Im so jealous of your catch!

I always hunt the vishus ribbon wand. But I don't really get treats for it. Way to go, Nitro!

I'm in awe of your description of your mouse chase. That's exactly what happens on my chases and I couldn't have said it better! Congrats.

I am the mouser in my family and have caught several in my 2 years of hunting. But I never eat them. YUCK! I'll stick with my food in the bowl.

Wow...the best part was that it was already *in* the kitchen.