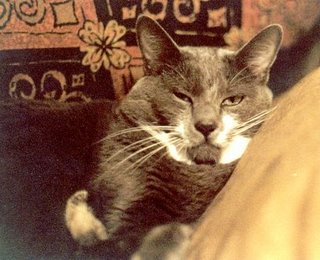 this is the family patriarch. he was the brother of The First Cat, Mouse McNasty. mouse went to the bridge after only one year. since She is lergic to kitties, she had never had one before and didn't know the warning signs of FUS, and he got really sick and couldn't be helped. She still grieves about that, and really misses him. eeker was always the "second cat" while mouse was alive; lotsa beans didn't realize there were two cats in the house. he slunk and hid while mouse always did the meet and greet.

however, he rose to the occasion when mouse left us, and became the king of all the cats that followed. he ruled with an iron paw in a velvet glove. even when he got frail, old and full of years (20), any other kitty could have knocked him aside, but they didn't. he could walk past them, notice he didn't like the cut of their jib, give 'em a whack with his paw, and stroll on unmolested. they respected him.

spotty was his special buddy, and came from nebraska to missouri with him. she was several years younger than him, and also lived to be 20. they make 'em sturdy in nebraska!

he accepted me from the start, even though i was at first only a weekend resident (the rest of the time, i lived in dad's warehouse and kept the mice on the run). i remember him "in the fur", so to speak, but none of the other kitties here now ever met him. over the years, though, every once in a while one or another of us sees him poke his cosmic nose into the kitchen, walk around, and check on the family he ruled. kitties have a duty to their furever homes, and eekie certainly does it.

Her name for this photo is "Uncle Surly", but that was just in fun; he was a Good Kitty.

(by the by: She said to tell you this picture was uploaded directly from google's free picasa photo management software. if you want to learn how, clicky on the little rainbow square.)

Posted by Meowers from Missouri at 11:00 AM

He certainly looks like he was the boss of the house. He looks very soft.

What a great story. He sounds like he was quite the enforcer. We love the part about him cuffing any one just 'cause he felt like it! What a wonderful cat!

we love the picture and the story. how great to be able to have him in your lives for 20 years!

This was a reely nice storey. I liked it. I'm a geezer cat. Duz that meen I can be the paytreeark? I cuff anyone hoo walks by me if they look at me funney.

There are even two leggers who are not living with current wundar kats that miss Unkel Eeker (other wise known as 'Fart Freckel')we misses him lots we does.