iggy's in trouble, big time! we KNOW he's not gettin' anyfing fur catsmas. we heard xing whinin' about him pickin' on her, but that ain't what's gonna get him a lump of dog doody in his sock. here's his score so far this week:

monday: grabbed mom's breffust sammich wif a paw when she put it down to get a drink of coffee. then he drank the coffee when she went to get the squirter to shoot him wif. result: drenching

tuesday: knocked dad's ice cream bowl outta his hand when he rushed to get his face in it. result: thwap onna headbone wif a spoon

wednesday: knocked mom's big wood peppergrinder down so dbd could use it as a chewbone. result: nuffin' excep a really potent stink-eye from mom, since she knew it was too late for yellin' an' wouldn't do no good

thursday: grabbed a bite outta mom's lasagna while she was eatin' it. result: fork-thwap onna skull, an' a butt-load of frustration acause he couldn't lick the lasagna residue offa the top of his head

friday: dragged mom's sammich plumb offa the table an' onto the floor while she got the grape joos outta the fridjamerator. result: dbd got a snack, iggy got a swat wif the noospaper 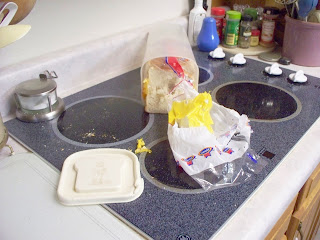 he got the bread box open an' tunneled his sneaky li'l arm an' paw alla way down to the bottom of the loaf!! dad asked him how he'd like it if HE got toasted inna toaster an' had jelly lathered all ofur him, since there was no breads left fur dad's breffust. we hear mom & dad are gonna keep the breadbox inna microwave frum now on. we finks it might be easier on efurryone if they kept iggy there, instead.

WHOA! Looks like you've got a real hazard going there!

Wow, bad kitty! Is it all true?

Heh heh heh! Is he related to Marmite The Evil Intruder Kitty by any chance? There is a certain resemblance...

Well it sounds like at least dbd had a good week.
Maybe Iggy can persuade Sandy Claws that he has a bad doppelganger purrtending to be him. We don't think he can pull the wool over Sandy Claws eyes though.

Poor Iggy has had a rough week. We're MOL about the lasagna residue!!

Sniffie and the Florida Furkids

::taking notes:: IGGY YOU ROCK!!!! ME will share my chrissymouse purresents wif you - Billy

Oh noooooo, Iggy's gonna get nuthing fur Krissmouse! We thawt he'd be over da kitten crazies by now but it don't look dat way do it...

Hmmmm...Iggy! Dude! You are either going to get a lump of coal in your stocking or your very own HBO comedy special! Hard to say what it's going to be at this point...

Oh Igmu, what a funny guy! I can just imagine the sixteen kinds of bad words Mom would say if that happened here. Gosh, I'm practically perfect compared to Iggy.

Wow, your Igmu sounds like our Anica! Although she has dumped tomato soup instead of ice cream. Hang in there, and remember, he makes everyone else look good, even when they are being bad.

Iggy,, the beans don't like it when you mess with their foods. You gotta learn to do it when no one is lookin'. Take tiny bites and don't leave any food outa place. When the bean comes back in room, you look at them and smile with your eyes. Your panther buddy, Tyler