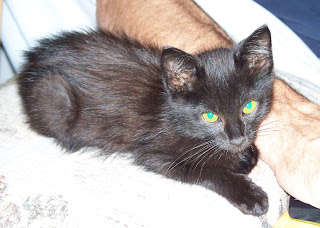 the big boys sed i could talk to you today (although i don't see nocat anywhere acept them), an' they would help wif the spellin' part. then mama sed she would help wif hittin' the little squares wif squiggles on them, so here i am talkin' to you fur the furst time--me, igmu sapa!

so far, i don't really know what that igmu business is. it's somethin' called a "name", an' the big orange cat sez that it means me an' that i should pay attention when i hear it. the big fat fluffy cat sez not to bother, acause we is kitties, an' that means we can do just zackly whatefur we want, asept when we hear "NO" eifur befur or after it. then we just hasta do zackly whatefur we want anyway, only faster. but i am cornfused acause i think i has ofur names. so far, i has heard sweetbaby, iggums, moo-moo, funnyyoudon'tlookmooish, inky-dinky, an' iglet. what does i do when i hears THEM?

an' the hissy-fissy big green-eyed fluffy cat just sez HISSSSSSSSSSSSSSSS when she sees me. i know what THAT means! geddouttahere!! so i gedout whenefur she sez it, an' keeps a respectful distance. the big boys are nice, though, an' i has already snatched something good-tasting outta the orange one's mouf acause he wasn't chewin' fast enuf, an' i thought i could help him. he din't bite me; i fink he was surprised. we both tried to help daddy eat his suppers, but he wouln't let us. later he put crunchies in our dishes, an' we all got full bellies. then the big orange guy let me sleep wif my head on his hinder end when we were on mama's lap after suppers. but i'm not sure he really knew i was there. maybe he did. he saw me when we both got up at the same time to vestigate the smell of mama's ice cream, an' he din't hiss at me when we got to the dish.

there's a REALLY BIG brown kitty here, too, but i don't like the way he smells (an' his mouf is bigger than the whole me), so i hisses my feroshusest hiss at him, an' he stays away. i'll get to know him later. the orange kitty sez he hopes it's MUCH later.

mama sez she has already tole you about how she come to take me home, so i won't tell it again. it was pretty asitin', i will tell you THAT! but i will show you now how good i can press the square things wif squiggles, an' she isn't gonna hafta do it for me next time, i betcha:

anyway, i'm tired now an' mus' go nap for a while; mama gave me more crunchies, an' i hadda eat 'em fast acause the big boys wanted them, too. g'bye fur now.
Posted by Meowers from Missouri at 5:00 AM

Iggy, you are simply precious!

Welcome to your new home Iggy, you are a little cutie, and a very lucky one at that to be part of such a wonderful family!
Purrs and headbutts,
Sabrina, Sam and Simon

Hi Iggy, it's nice to meet you. Sounds like you already have a friend in Nitro, even though you did pinch food right out of his mouth.

Hi ya, Iggy! It's nice to meet you! Looks like you found a great place to live! Be careful stealing food out of Nitro's mouth...he might not like that next time! But it does sound like you are fitting in well!

You are cutie! With a name like Iggy you will have personality! We had an Iggy Cat and he was a very special cat.

Iggy, you did real good on your first post!

You look just like we did when we came to live here. Are you going to be a medium fluffy too, like we are?
You've gotta just ignore the hissy one. Cocoa won't stop hissing at Max either. Somekitties just have an attitude problem forever. We're glad you're getting along with the boys. That big fluffy one is a very very special furrend of mine. Purrrrrrrrr!
Midnight

All that hissin' goin' on must sure be tiring! Have faith, kiddo, things will settle down in time☺

Ivan and Izzy from WMD said...

Iggy, you sure are cute. But I'm afraid seeing your picture is going to make my mom go into baby mode!

Hi there Iggy! You are so cute you make my mum go SQUEEEEE! I know you are going to have a great life as a Meower in Missouri!

Hey now, Iggy! We just read about how you chose and adopted your new human staff, and we congratulate you for your excellent choice!

Iggy you are so cute! And I hope the other cats start to accept you more as time goes on.

Check out my blog about a colony of abandoned/feral cats near my home. There will be stories there as time goes on that could inspire and inform anyone you know who wants to help homeless cats.

Oh Gosh! I'm sorry. I just realized you have me in your blog list already!