mom's side of the story, part the final

SUNDAY: at 5:00 a.m. i heard edmund singing for breakfast, which is a little odd, since it is always nitro who sounds the chow call. nitro had been acting a little weird the previous two days to The Arrival, and been unable to keep food down when given his antibiotic, so tom's gotta call the vet tomorrow to ask about that. but so far, he and the kitty have been nose to nose several times, with only minor hissing from nitro, so we hope this doesn't stress him into further problems. timing here could have been better! at any rate, i fed & played with mr. kitty, and put him back into the cage, and headed back to rack up some more zzzzzzzs.

in the early afternoon, we made the weekly wal-mart run with him loose in the house, and still no bloodshed. we think this might work out. xing is all hiss and no bite, and cocoa has been begging to stay outside most of the day (although it IS a gorgeous day), so we think she will not offer him violence as long as he is small (and a relatively unknown quantity). i suspect that he'll hand her more than a snootful of claws when he gets bigger and she tries to roughhouse him like she does nitro, who never offered more than token resistance.

please purrr and prrray for a successful and healthy integration of kitteh and family!!! he's already got the hang of the "big boy potty box". he eats like a feral, diving face-first into anything that smells edible, even if it happens to be in your hand at the time, a la nitro. and yes, he got his first taste of the dreaded squirt bottle this morning while rummaging through the dishes in the sink. sadly, while it got his attention and persuaded him to exit, stage left, he was quickly back for an encore. and another. and another. *sigh*

oh yes: in honor of his uncle steven (who is lakota), his name is Igmu Sapa (IGmoo SAHpah), "black cat" in the lakota language. tom's calling him iggy, and i refer to him as moo-moo, with further variations to come, i am sure. 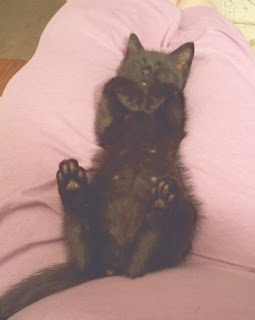 He's gorgeous and we are so happy that things are going well!

We're purring for everycat to get along okay!

He is precious, we hope everyone is getting along soon too.

What a little doll baby!

We are purring for a happy integration!

Hey there Iggy Moo Moo!!! You are so sweet!

It sounds like things are already going well with little Iggy!

ooooh, mega cuteness! would you like to join House Panthers, Iggy?

Aww he is cute. We hope everything goes well between them all.

He is a cutie. I hope everything goes well! How could he not get along with those great cats?!