when i sat on Mommy's lap tonight, she made the puter's face show kitty blogs, and we sat there and read them together. i like that; it's fun to be cuddled and see other kitties who don't chase me.

after a while, one of them showed a kitty who sort of looked like me. it was meowing and meowing. i stepped off Mommy's lap and over the typing thingy to see closer, and it meowed right in my face, so i stretched out my paw and patted it--and it didn't feel like another kitty at all! it didn't even smell like a kitty. i stepped around the whole puter face, looking for that kitty and never did see it. how can that be?
Posted by Meowers from Missouri at 8:20 PM 2 comments: 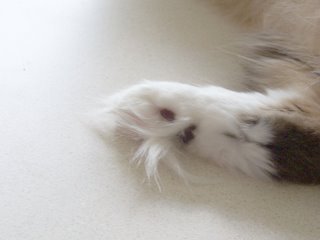 when i mentioned in an email that my toeses were very furry, but ed's were even moreso(i said they looked like snowshoes), kismet said he didn't have toeses like that, and would like to see them. so Mommy got the camera out and took some pictures today. and golly, mine are fuzzier than ed's! i guess they grew some since i first compared!! so here's me on the right . . . 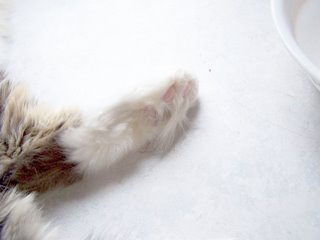 and ed's on the left. the fuzz is very silky and purrty, 'cause we groom it lots, but it's a hazard to navigation: we both slip and slide on the tiled floor, and sometimes crash-land into things when we're running!

i can hear nitro in the kitchen now, clattering around while chasing a little bitty mouse. i'm betting on the mouse. ;-)
Posted by Meowers from Missouri at 11:49 AM 6 comments:

kitty game for the beans

She told us you had to have your beans try the cute game here:
http://www.ferryhalim.com/orisinal/g3/cats.htm

and She said this site has lotsa cute little games for you to waste your time on:
http://www.ferryhalim.com/orisinal/

i gotta go now; i smells mousie inna kitchen!!
Posted by Meowers from Missouri at 10:20 AM 3 comments:

she is almost as twitchy as our late cousin, charlie fluffytail, used to be. if She or He was sitting in Their chair when charlie walked by, they could just move their foot a little teensy bit, and he'd do a double-twisting backflip with a half-gainer and run into the kitchen. ok, They knew it wasn't nice to tease him like that, but it was funny. we used to call him charlie twitchytail behind his back. 'cause that's where his tail was, you see. *smirk*

and she hollers! oh my goodness, does she holler. just walk past her, and she hisses; look at her a little too long, and it sounds like a pig being prodded by pitchforks. chase her a little, and she just stands still and wails! of course, He or She both come running with the squirt bottle, and pick Their little precious up out of reach. then we get soaked and hear the "bad cat" routine for the jillionth time. if we're so bad, how come They loves on us so much? answer me THAT!

she doesn't even fight; i don't think she knows she's got those razor shivs on the ends of her toes. and they're much more wickeder than ours--She doesn't like to trim them, 'cause xing gets SO mad. ours get trimmed regular, and She doesn't let our vocal protestations bother her one little bit.

it's been more than a year that she's been here, and she's still afraid of every little noise and thing. you'd think she'd figger out by now that nothing was going to jump out and hurt her. oh, yeah. except us. but we don't want to damage her (well, maybe only a little, incidentally). mostly we wanna see her up close, and play like cats. and she just doesn't have a clue.

nitro, specially, would like to have another playmate, 'cause i hurt in various places all the time, and don't like to chase around. edmund will play for a while, but then gets tired and flattens him. it'd be nice to have someone his own size to wrassle with; ed and cocoa aren't really in his weight class.

one time, our She even brought home some Feliway, but it didn't do a dang thing for ms cranky's attitude. even if They get us all 'nipped up, she's a mean drunk--she gets huffy and hissy if someone happens to roll into her pile, and swats anything that moves. should we pool our allowances and get her some medication? jeesh!
Posted by Meowers from Missouri at 8:48 PM 2 comments:

runty? i think not.

HEY! nitro here: there's been some calling of runt names here lately, and in comparison with fatboy ed, i guess i do seem a little undersized. but our She calls that "perspektive".

i'll have you know that our nice vetlady, dr harders, says my 11 lbs is more what cats were intended to be like, sizewise, considering their jeans. (although i don't understand that, since we don't wear them; it'd be silly. how could we zip or button them without thumbs? those damn thumbs again!!!) anyway, she learned about jeans and being the right size by knowing someone named evvie looshun.

but the doc says ed is healthy even though he's big; he's not just one big liver or something. (one big stomach, i say.)

so according to evvy looshun, it's not us "runty" guys who are abbie normals. it's the big fellas'n'gals. not that there's anything wrong with being big--besides, She would sit on me and mash me flat if She knew i said that. the more diversity, the better. *wink*

dr harders is very smart and loves all us meowers and even the dawgs, and she wouldn't lie. we like her 'cause she takes good care of us and doesn't ever hurt us more than she has to. she even likes cocoa, that screwy dog who has a crush on me!

and i am, after all, an easygoing but bold, vigilant, stubborn obstinate ummmmm, i don't give up easy, extremely handsome ginger cat who bravely holds the fort every day while the slackers sleep when She leaves the house to go work. i AM somekitty!
Posted by Meowers from Missouri at 8:25 PM 8 comments:

wow, the weather threw a very noisy party last friday night, and our neighborhood is still cleaning up from it. about three hours past treat time, They went to bed--and that's when rain started. the wind blew real hard and banged the rain into the house like cat kibble being plinked into a metal bowl--from off the roof! it was pretty intense.

nelson went and hid under the china closet. after a really big flashy-boomer, he slunk into the kitchen all low-slung like our big cousin the panther, and so fast that it looked like he had lots more legs than four! we heard a ka-thunk, and knew he'd scrambled into one of the cabinets where he could hide and not see even a teensy bit of light. maybe it's quieter in there, too.

we have no idea what xing did. she sleeps in her own rooms with the doors closed. she says it's because we gang up on her. we think she's just a stuck up little princess.

we could hear cocoa thumping around in Their bedroom, and Him finally getting out of bed to explain to her that everything was ok, she was there in Their den, and He wouldn't let anything happen to her.

ed and i are the guard cats. we just laid in our chairs, ears cocked and alert to anything that might threaten our family! although after a really loud flashy-boomer and a HUGE THUD, we hastily conferred and decided to adjourn to the underneaths of our chairs, where we could groom ourselves into some semblance of coherence a state of bliss and then consider what to do next.

well. finally the rain stopped and we all began to sleep better. but we didn't see nelson again until He got up to let the dogs out and feed us crunchies!

and later, we saw from our kitchen window perch that the big wild cherry tree where the squirrels perch and cuss at us had just twisted off! betcha it made the loud THUD that rattled our alerted us that the storm was at its peak. so He took the big noisy stinky saw out and cut all the wood into lengths that will fit in the fire box that keeps us warm in the winter. when He was done, He looked like He'd already been sitting close to the fire box. She said that He looked like He'd been dipped in sweat (we think she said "sweat") and rolled in crackers, ready for the fryer 'cause he was fulla wood chips!

even this morning, we can still see that there are still big tree arms lying on lawns all down the block. mosta the time this neighborhood is pretty quiet, but when nature throws a party, we hold on tight!!

this one's for you, fat eric! 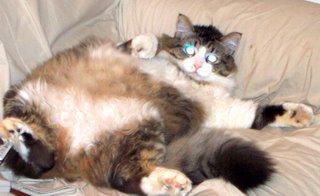 fat eric from over the water (who is of quite catly proportions himself) asked for a tummy-up picture of me, so here is one She had on the puter. She says it makes Her queasy to look at my eyes in this photo, 'cause it looks like i have fairy lights in my eyes--or the fires of hell, maybe, The Boy says. 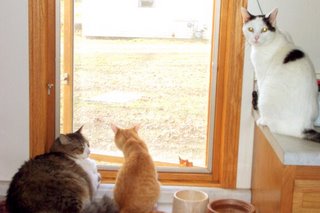 here is a picture of me and my brothers at the kitchen window. the part that nitro and i are sitting on is actually some cabinetwork cut short to fit under the window just so we meowers have a place to laze about and stare at the side yard! we are all full grown; you can see how runty nitro is! of course anykitty would pale comparison with my majesty. i am majestic, am i not?

She says that she will try to snag a picture of me on the living room floor next time i am "assuming the position". it remains to be seen just how co-operative i might be . . . it's been a long time since She got the 'nip jar out.
Posted by Meowers from Missouri at 9:24 PM 7 comments: