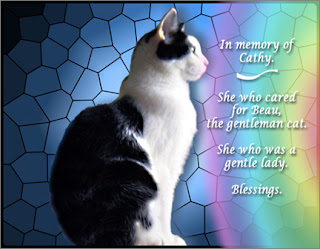 we jus' can't believe that dear miss cathy has left before beau! that shouldn't be alloud. we's purrin' fur heart's peace fur beau, an' his bean sisfur, an' his grammie an' grampie.
mommer keeps drippin' on us, an' we needs to be alone. we are gonna go hide fur a while an' think quiet thoughts.
Posted by Meowers from Missouri at 9:50 AM 13 comments:

my folks went to chicago ... 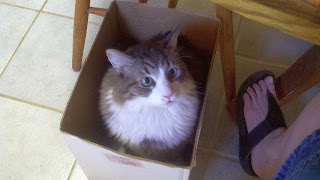 we will start postin' again just as soon as mommer kin collect her scattered thoughts. we figgers said thoughts are all ofur the countryside between springfield an' the chicago 'burbs, acause that's where she an' dad were all last week. on august 28th, mom's furry, furry, furry old auntie (93 squillion sleeps) was wafted away to hevvin, an' we think that's sad acause there wasn't no critters waitin' fur her as she crossed the bridge--she nefur had a pet. but ofur than that, efurryone was furry glad that her soul finely was released frum the prison of her withered body an' mind, an' that she is happy again an' free to be all that she was intended to be from the furry furst moment god thought of her. mommer isn't teary or upset, just grateful that there's no more sufferin'; she's done her grievin' ofur a period of years, as auntie left bit by bit.

the "scattered thought collectin'" is due to mommer bein' her last livin' relative, an' haffin' to go through 60 years'-worth of stored stuffs. gramma an' grandaddy useta liff upstairs from auntie, an' some of their stuffs is still there, an' there is stuffs from ALLA them inna basement (which is a room unnerground, what we don't haff here in missouri onna counta there is too many rocks to dig a room-sized place). so mommer an' dad hadda traipse up an' down stairs a lot an' bend an' reach an' sort an' shred an' drag stuff to the trashcan out back, an' unpack an' repack stuffs what hadn't nefur been unpacked since they was gifted, an' haul three carloads to goodwill, an' make cremation an' burial arrangements, an' go see lawyers an' banks an' ofur fambly from gramma's side, an' talk to contractors acause the house needs repair befur it can be sold because auntie wouldn't let nobuddy work onna house inna last 10 years, an' try ta find peoples to buy furnitures acause our house (an' barn) will asplode if they bring enny more furnitures into it. her mental faculties is f.r.i.e.d.

the worst part of the week was that they both founded out that they are older an' creakier than they thought they were.

the good part of the week was that they also had some nice meals wif yummy ethnic/chicago-style foods, an' they dranked a few "toasts" (although that involved likker insteada bread, like we thought it did) to auntie's memry.

an' the best part of the week was that they gots lots accomplished (although they still gotta go back again at least once an' prolly two or three times), an' efurrytime they met somethin' that coulda turned into a clusterflock, it worked out just fine--either somebody knew someone who could do it or fix it or arrange it, or the process weren't as terrorfyin' as they'd feared, an' efurryone at city hall was furry nice to them, etc. etc. like they were bein' watched ofur. we're pretty sure they were!

we din't suffer too drefful either--getzger's momma (miss ginger) an' sometimes mr gary came ofur an' fed us an' scritched us an' loved on us an' scooped fur us inna mornin's, an' our bean-brofur did the same inna evenin's. it was like a vacashun fur us acause the dbd stayed at his house an' wented to work wif him, like she does sometimes wif daddy. so we survived an' only lacked secretaryin'.

so that's where we's been an' what's been goin' on. things'll get back to nermal eventually!!
Posted by Meowers from Missouri at 1:11 PM 18 comments: