mom's workin' on the prize package video, so in the meantime we're gonna show how pretty it is here--even this late in the year--now that the dadgum rain has stopped. 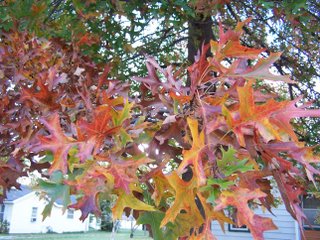 here's leafs in our oak 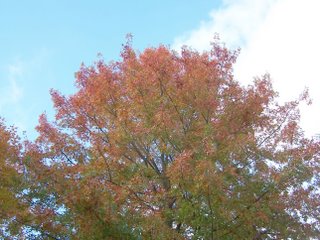 an' here's our oak tree up at the top 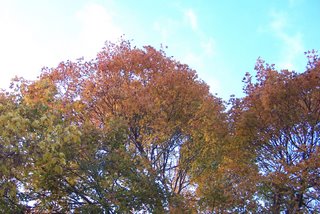 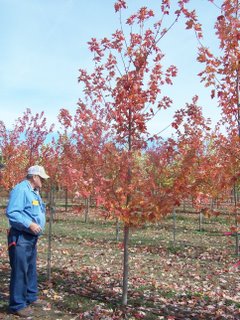 an' here's the new maple mom & dad bought at a nursery today (an' no, that's not dad, that's the tree nurse).
Posted by Meowers from Missouri at 3:09 PM 6 comments:

my prize package from skeezy's contest came today an' mom let me open it an' effurything inside smelled like primo nip so all the ofur cats came running to see what smelled so good and so mom put me inna bean litterbox room wif her so she could take mooveys of me while i opened it all an' i did an' she did an' it all smelled so good i rolled in efurrything an' rassled the nip-bag around a lot an' then discovered there was fev-ver butt mousies an' i losted all interest in efurrything else (but i still kept lookin' at the pink fev-ver boa an' tryin' to decide whether or not to go back to it) and tost 'em an' bunny-kicked 'em an' hockeyed 'em all around the little room until her camera filled up so she went an' downloaded an' came back an' put some more of the stuff out for the ofur kitties an' took some more mooveys (which she won't have ready to put on our site until prolly monday) while we rolled an' hissed an' kicked the toys an' then we got mad when she put the nip out of reach for a while 'cause we was gettin' sillier an' sillier so we hadda just play wif the toys an' then dad came home an' played wif us anna toys an' made mom promise that we could go to "Nipstock" later tonight an' even though we don't know what nipstock is, we can do it--i'm just sure of it--if it involves even a little bit of nip!!!!

taking the picture of nitro in his halloween costume wasn't all beer & skittles. the shirt is a size 3mo-6mo from the thrift shop, and i sewed the bling around the neck from my jewelry parts stash. getting him into it was like dressing a recalcitrant baby, but i was encouraged that he didn't freak out during a coupla shirt-wearing dry runs.

however, came the photo shoot, getting that HAT to stay on was a whole nuther story. first i stuffed it with tissue paper, and the crackling of it was so alluring to him that he kept trying to see up into the hat. then i tried stuffing it with bubble wrap, but that was heavier than the tissues, and he didn't like it. i knew i shoulda stuck with the tissue, but we shot with the bubbles. if only i had been smart enough to stiffen the crown with white glue (which is how he got those perky ears) and then glued it to his head!

and here's the story of the "proud meezer posture" several kitties commented on: when we got him all dressed, he suddenly developed an advanced case of jello-bones--would NOT stand or even sit on dad's lap, just collapsed into a puddle of nitrobutter. so we ended up setting him on the kitchen table with dad behind him. dad started out by holding him up by the collar. that pulled the bling into his fur and outta sight, so i told him to grab him by the scruff. he did, and that worked best, but the poor kitty looks like he's had two too many face-lifts.

after the costume came off, he did come seek me out, so he didn't hold a grudge. what a Good Kitty! i wonder how he'll like playing Santy Claws . . .
Posted by Meowers from Missouri at 6:20 AM 6 comments:

today's cartoon. if you're not already a fan, you could start now!
Posted by Meowers from Missouri at 8:15 AM 4 comments:

(not quite) wordless wednesday 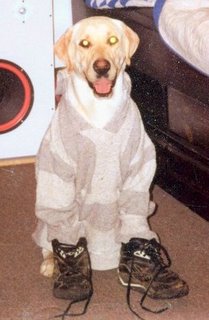 ok, it's a woofie, not a kitty, but mom asked if she could pick the picture, and we let her. she's been thinkin' a lot about him lately: this is thor, The-Dog-That-Was, and the most good-natured woofie that ever was, too. xing doesn't 'member him, but the rest of us do, and he was a Good Dog.

ok, it's not wordless, either, but we figgered we'd better 'splain so nokitty thought one of us had turned coat, or been eaten!

an' this wasn't halloween, either. the Boy just felt like doing it, and thor was happy to go along with him. like we said, a Good Dog.
Posted by Meowers from Missouri at 7:13 AM 6 comments:

here, in all his fluffitude, is the one, the only,
Sir Edmund Percival Hillary, Earl of Pierce: 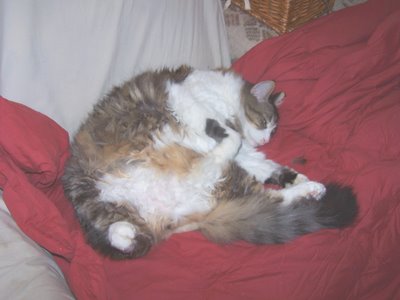 Posted by Meowers from Missouri at 6:32 PM 10 comments:

hell is at 35 degrees and holding:

here are nitro, edmund, AND xing lu, all on mom/mom's chair AT THE SAME TIME! granted, even though the boys are playing by the kitty-courtesy rules and ignoring her like mad, xing's still muttering and swearing at them. if mom weren't there, xing woulda been gone in an ill-tempered, growling flash. and possibly a puff of sulphur vapor.
Posted by Meowers from Missouri at 7:43 AM 7 comments: