where in the name of pahket did they find KITTENS???

they have been hording them out on the porch all this time!!

and what are they here for? 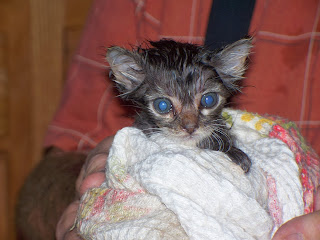 an' they were all shivvery an' stuff fur a while, so mommer made 'em into purritos an' then they innerdooseded them to us. 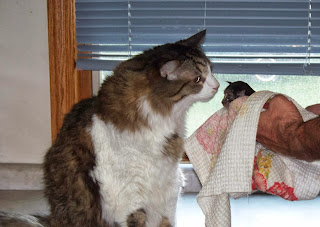 ed sniffed and din't say nuffin', just looked as bemused as usual. he don't really fink long an' deep about much. as long as somethin's okay wif mommer an' dad, it's ok wif him. we'll see how this kitten thing werks out! 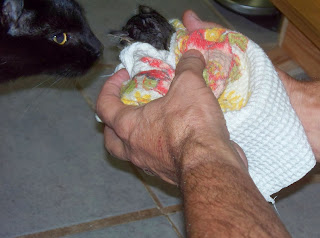 igmu sniffed furry carefully, then hissed an' runned away! 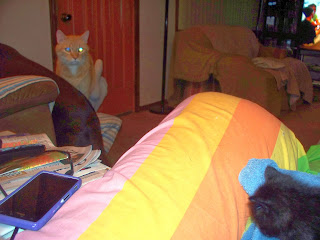 nitro ran away outta the kitchen, too, wifout even sniffin' the babies. but later on, he eagle-eyed 'em. din't say nothin', though. xing was in her rooms an' din't come out to see 'em. mommer sez anofur time for THAT particular drammer to happen. 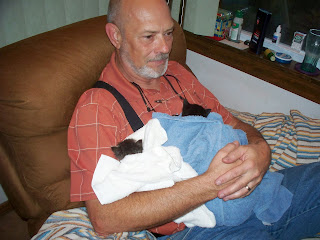 later daddy holded em on his chest. then they wented to sleep acause they had et copious amounts of that ambrosial-smelling chow (they won't let us haff), an' peed an' pooped in their OWN litter box. she sed the little girlcat din't know how to use the litterbox at furst, but she watched her brofur an' now she does. imagine not knowin' how to use a litterbox! it's a good thing cats get smarter wif age! 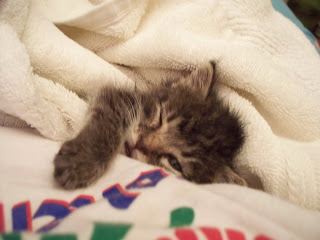 now they are back onna porch inna big box iggy spied yestiddy, nappin' up a storm. they will prolly wake up an' eat an' drink an' poop an' pee again inna night. we're gonna lissen to see if they serenade us now that they know we are here.

mommer sez the li'l black boycat is gonna be our new brofur, an' the little grey girlcat is goin' home to kansas wif aunt sue an' uncle steve, but she's gonna lif here wif us until she is bigger an' stronger! we ain't furry sure about this ... .

igmu sez:  i bin watchin' outta the liffin-room windows, an' there's a big box out there. mommer an' dad put stuff in it, take stuff outta it, and lift up little fings that look like cats--but they're really, really small.

now, alla us boys an' xing haff been "fixed" in that special way, so they can't be "kittens", acause kittens only come frum "unfixed" cats. bast knows, i've tried enuf times with nitro, and NO KITTENS! EFUR. so i know that's true.

an' mommer's jeans smell funny in places that are NOT where they USUALLY smell funny. what's up with that?

and what in the name of sekhmet ARE those critters, an' what are they doin' on our porch???
Posted by Meowers from Missouri at 7:56 AM 5 comments:

well. nitro here. there is somethin' weird goin' on out onna enclosed front porch. mommer an' dad keep goin' out there wif stuff, an' they come back in smellin' awful strange.

they won't let us see or even stick our noses out the door, an' we are mighty curious.

shaddap, ed. you're curious, all right, just not inna way you fink.

anyway. mommer was makin' stuff inna kitchen an' throwin' spoons an' cups around, an' the stuff she was mixin' smelled 'licious,

*ed*: but then she went an' got some stinky goodness an' put it in there too so it smelled even better! but then she left! she took it an' went out the front door!!

an' more heinous yet, yestiddy afternoon miss ginger an' mr gary an' lanie the mermaid came ofur to bisit, but they just staid onna front porch an' nefer efen came in to gif us a howdy. our noses are mightily outta joint to haf been ignorified by our favorit furriends. *hmpf*

yeah. there's a mystery goin' on here, all right. we'll polish up our detecktive skills an' keep you posted.
Posted by Meowers from Missouri at 6:00 AM 8 comments: 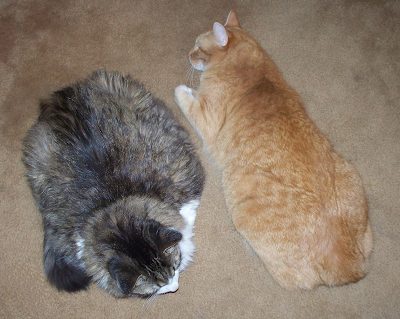 looks like these two mencats haf done pretty well fur themselfs!!
(mommer: or at least for their bellies!)
Posted by Meowers from Missouri at 6:00 AM 3 comments: