mommer chosed this picture of nitro lazer-eyein' her to post today because it reminds her of a story about her nieces when they was young beans. they had a dawg named frou-frou who liked to dig tunnels in the soft sandy soil where they lived. one mornin' one (or a couple) of the girls (mommer can't remember acause it was about a billion sleeps ago) went lookin' fur f.f. an' came runnin' into the house all scared an' hollerin' "mama, mama! there's a monster in frou-frou's cave!!!!!" yup; lazer-eye strucked terror inta their li'l girlie hearts!
Posted by Meowers from Missouri at 6:00 AM 3 comments:


Posted by Meowers from Missouri at 6:00 AM 7 comments:

something met a toothy death 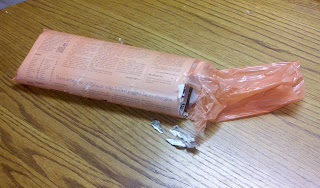 well, a wounding, at any rate. usually when mommer gets up, iggy is layin' onna noospaper to keep it "hot off the presses" fur her. he wasn't there this morning. we ain't sayin' why.

this reminds mommer of a pome she writ a long time ago fur a kitty-who-came-befur, prrrrow. that was his name--he told her so.

Posted by Meowers from Missouri at 6:00 AM 12 comments: 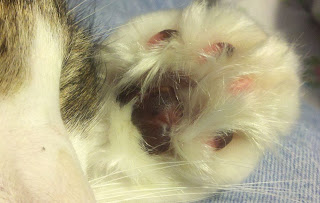 Posted by Meowers from Missouri at 6:00 AM 15 comments:

at some time between bedtime last night and o-dark:thirty this morning, a crime was committed. the horrifying scene was discovered by an off-duty, barely awake crime-scene photographer on the early feeding shift. (o-dark:thirty, remember--hence the non-quality of some of the pictures.)

a vigorous inspection of whiskers and paws followed immediately upon discovery of the crime, but results were inconclusive.

a known associate of the three, the dbd (aka cocoa), was positively excluded from suspicion, having been locked in the bedroom with the photographer and the photographer's husband during the period in which the crime occurred.

local law enforcement is stumped, so we put it to you, cat bloggers--

Posted by Meowers from Missouri at 6:00 AM 10 comments: