mom finished the decorating last night! nelson snoopervised (nappervised, we mean) the hanging of the stockings that mom knitted about a million-billion naps ago (almost 30 years!!!). 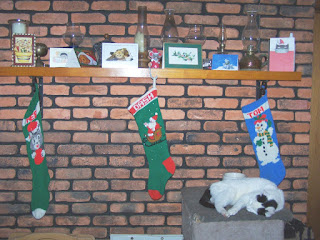 here's our catsmas tree, which isn't as much fun as the big one we can climb, but at least there are some ornaments on it this year, an' our very own catsmas stockings are hung behind it! 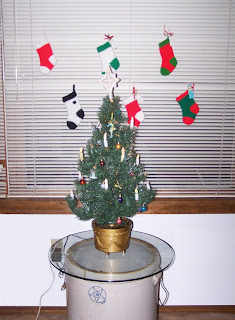 this nutcracker is one that mom & dad gave to grampa in chicago along time ago. he had a display of about 20 nutcrackers that he called "the croatian army" (he's croatian). now he's in a nursing home an' can't haf stuff like that ennymore acause some of the more confused residents would help 'em get mislaid. they've heisted his glasses twice, his clothes disappear from his closet, etc etc--he's even found someone else in his bed a time or two, not that (at 94) he would care in any meaningful way--so we reinherited this guy. 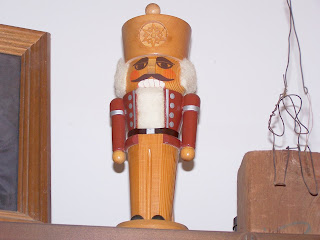 here is mom's nativity set that great-gramma an' granpa an' the aunties gave her when she was a kid. it was made in italy, an' is out for the first time since ed came to live wif us--he had an unhealthy interest in it . . . now we has this nice glass case it can live in. mom hopes you likes the flash/christmas star. she worked hard to get it centered just right! 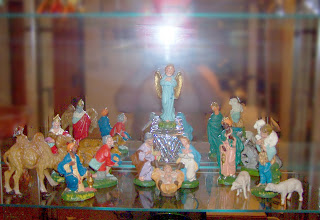 an' this is mom's saint nicholas that her gramma gave her on st nicholas day (6 december) when she was six. it had chocolates inside it then, now it has temptayshuns. ALSO behind glass, drats. (an' yes, mom admits she's a lousy housekeeper, as evidenced by the smeary mirror. she sez, "deal with it!") 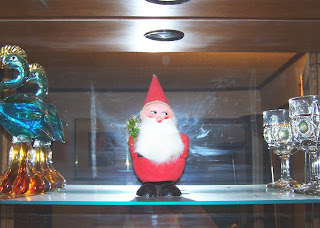 Posted by Meowers from Missouri at 9:44 AM 11 comments:

wanna guess which one i am? 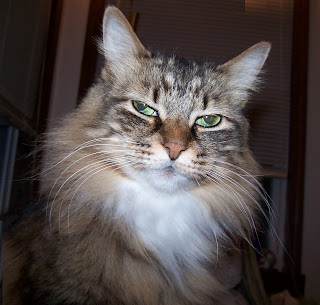 Posted by Meowers from Missouri at 7:00 AM 21 comments:

YOU KNOW THE TOON, NOW HERE’S THE WORDS:
(click to biggify) 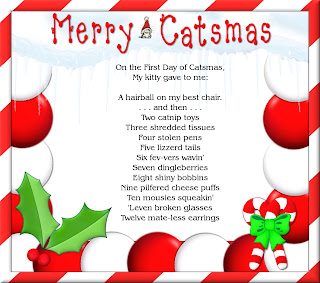 There, now . . . wasn’t that fun? An’ your beans will LOVE hearing it yodeled at the top of your lungs efurry 3 ayem inna morning from now until catsmas! Honest!!

***Dragonheart pointed out that he (an' ofurr sphynxies) wouldn't be hurlin' any hairballs. He sez therefore he'll be singin', "some eye goop on my favourite tee!"*** ::giggle::
Posted by Meowers from Missouri at 5:45 AM 12 comments: