see what i have to put up with?

it always happens this way. i just want to settle down with Him and watch some nice pictures on the big box, and i then have to constantly fend off cocoa! i get no respect.

(why did She laugh so loud when i typed that?)

Posted by Meowers from Missouri at 3:42 PM 7 comments:

and for you doubters out there who wondered about the validity of having a boss, a QA guy, and a bookkeeper as judges, we herewith list their submissions:

QA guy: Cat said, "I knew the Lord would provide!" Mouse said, "Ohhhhh, I shoulda listened to that preacher!!" (mom's comment: if the jews got manna in the desert, did their cats get mice-a?)

bookkeeper's second submission: Mouse: "Cat, tell me again why we want to be in the Guinness Book of World Records?????"

AND THANK YOU ALL FOR PLAYING!! please stay tuned for the next non-contest; we'll see if we can come up with some stickers for your pages, at least!
Posted by Meowers from Missouri at 1:08 PM 6 comments: 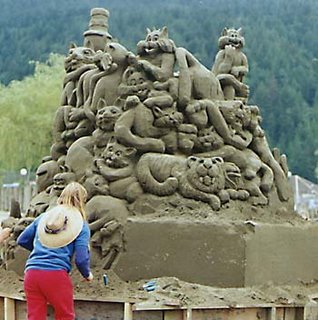 what a stunning sand sculpture!! you can see more sculptures (but not a single one as kittified) by clicking here. this one didn't win a prize, though. sadly, it collapsed before the judging.
Posted by Meowers from Missouri at 4:32 PM 7 comments:

OK, a completely independent panel of judges (mom's boss, the QA manager, and the bookkeeper--all of whom know "funny" when they see it) has been tasked with deciding on the winner of our non-contest. we'll keep you posted . . .
Posted by Meowers from Missouri at 11:01 AM 4 comments:

Luna's visit to the vet (translation)

Sue asked for it, here it is:

Mama says that I have comported myself like a perfect lady. The vet gave me antibiotics, and also a spray for my fleas and some medicines to use in the house. He says that with lots of caresses and care from Mama and Papa, I will be healthy in a month.

(under picture) Here are my medications. Although they taste bad, like a good “gatorrista” (must be dialect for some kinda kitty, maybe brave kitty?), I will take them in order to get well very quickly and play with all my friends.

Thanks for all the welcoming greetings. I never thought I had so many kitty friends.

and here's Luna's blogspot. you need to check out the chairs at her vet's office!!

peeyes: don't forget our "caption non-contest", below!
Posted by Meowers from Missouri at 9:57 AM 8 comments:

WARNING - TOO INTENSE FOR RATTIES & BUNS - RATED "C" FOR CATS ONLY!!

well, not really a "contest" in the sense that you get a prize--'cause we can't afford a prize right now--but you DO get braggin' rights!! so: 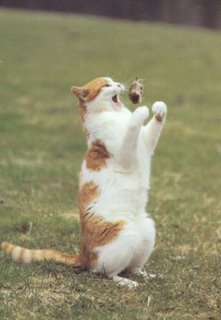 What is the kitty saying? What is the mousie thinking?
(Note: they don't have to be having a conversation--in other words, the two phrases don't have to match each other.)
Posted by Meowers from Missouri at 5:31 PM 19 comments:

GOD IS GOOD!!! Y'all remember the little Spanish kitty who got losted by some dopey bean calling himself a vet? Well, here's mom's translation of today's post by Luna's mom:

Surprise! Look who we found! Someone who saw the announcement about Luna in a magazine called us to come see a cat who was hanging around some garbage cans, and when we got there--SURPRISE! It was our little Luna, very scared, and (there were) a lot of other street cats around there, too. She was very skinny, with fleas and a sore on her nose, but thanks to God and all your prayers, she is with us now. Tomorrow, the Veterinarian will see her (of course, not that irresponsible person who lost her). I, myself, will take her and leave her (Luna) with her (the Vet) until the visit is over, and carry her back home. Thanks to Saint Francis for protecting her and Saint Anthony for finding her. THANKS TO EVERYONE!! [Sniff!!] Now all we want is to be with her and spoil her!
Posted by Meowers from Missouri at 7:53 PM 16 comments:

our She is very nervous. She changed the litter boxes over two hours ago, and nobody's used 'em yet! not even nitro, who straw-bossed the whole operation, an' he's been known to use one while She's pouring in the new stuff. so this is really wigging Her out. we just decided to drive Her crazy in a new way and not use 'em for a while. *smirk*

They went to a wedding yesterday. They got in His big red metal box and were gone all morning and all afternoon. They got home JUST in time to feed us on schedule. we were gettin' sorta worried! the weather was furry, furry nice, so it was held outdoors in a gazeebo. (that's an outdoor house with no walls, if we understood His splanation right. not a house without walls, izzit?)

anyway, the lady and man, their mommas and daddies, some friends, and a guy in a black nightgown all went into the gazeebo. the black-robe man asked the two people if they wanted to get married, and then he said they were. then they hadda sign papers, and our He and She signed them. wonder if that means They're married to them too? gonna be kinda crowded here, if so! but They didn't bring them home with them, so probably not.

it's a lazy, gloomy, cool day here, and They even put on long-legs pelts today. now He is "putting up hay", but She calls it mowing the grass. She is putting their substitute pelts in a big box, and after a while, takes them out and puts them in another, noisier box. we don't get that, but She's alla time checking to see that we don't explore them. says that kitties don't like those machines. how's She know? is She a kitty? it's mean not to share. after all, look how much She uses them! She wouldn't do it if She didn't like it, would She?

at that wedding, the momma of the lady who got married was taking movie pictures with a different kind of camera than what we's got. She wants one now, so She can take movies of us and put titles and such on them, 'cause she has learned to do that. but He says it'll be a cold day in hell before They get one. should i tell Her that we read on Max the Psychokitty's blog that satan goes ice-skating? that'd mean it was pretty cold there! ;-)

anyway, hope you are all well, and your beans are cuddly!
Posted by Meowers from Missouri at 1:39 PM 1 comment: