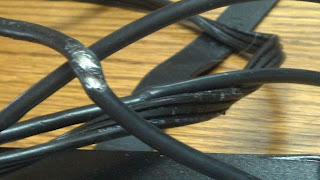 no fanks to edmund percival, howefur. you may recall his previous experiments wif electric cords: here an' here. he has not learnt ennything.

we thought youse should know why we was 10-10 an' onna side* last week. this time, ed's snack was the laptop cord--we don't haf a reglar computer enny more. mommer hafs a "smart phone" but it's pretty stoopid in matters of bloggifyin' an' so she couln't help us wif it. since it's an old laptop, nobean in town had a cord fer it, so she hadda order it onna innernets. it took the man inna brown shorts a dreffully long time to bring the new one (yestidday). so we are astreemly behind on our postin' an' probly won't get back to reglar (M,T, & W) until next week. just remember, it's ED'S FAULT!! (*mommer sez, if you know what that means, you are older'n dirt, just like her.)

mommer allus disconnects the laptop an' rolls up the cord so at least ed's eyeballs won't light up an' spin like onna pinball machine when he bites it, which is what we allus figgered would happen to him someday. she tries to put it outta the way where he won't find it, but he musta outwitted her. which makes us furry sad becausa what that sez about mommer's brain.

we are all furry peevish wif ed now acause we gots to werk hard to catch up. we haf sat on him, smacky-pawed him, put the bitey on his ears an' tail, an' even hollered until we are (rather becomin' shades of) BLUE, but he just won't quit bitin' plastic. right now, he's lyin' inna kitchen window, nuzzlin' the slats onna blinds. mommer's hollerin' at him an' nitro's lyin' next to him, kickin' him inna furchin (which is that saggy part ov yer belly right in fronta yer hind legs), but ed's eyes are closed in bliss, nommin' an' nommin'. we needs an innervention!!!
Posted by Meowers from Missouri at 6:00 AM 16 comments: