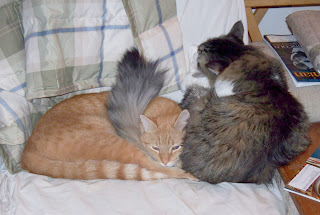 nitro: yeah, frost. it's my butt that's frosted, howefur!! in both senses of the word. daddy is on the hiss list. boooooo! hissssss! he din't make a nice cozy fire last night OR this morning before he left for whatefur it is he left fur, an' it's so cold . . .
xing (offstage, left) : how cold is it???
n: not so cold that we would efur think of letting YOU inna nap pile, you pr. . .
MOM: Sonny, no name calling. Dad's company is taking part in a trade show, and he's the manager, so he's gotta be there even though it's Sunday. Now, behave.
n: sure. like dad behaved all night. he was out here snorin' an' mutterin' an' NOT PLAYIN' when we wanted to. an' we brought him all our best toys that cocoa hasn't eaten yet, an' all we got for our troubles was additions to the bad word list. an' i bin hafin' to wear ed's tail like a scarf to keep my delicate meower in working order so i can sing throughout the house later.
M: Well, you better stifle that singing tonight. Dad has a cold and is having trouble breathing when he lies down flat, so sleeping in the recliner helps him.
n: hah! he obviously does not haf a grasp on the nature of things in our house. beds in bedrooms is where beans sleep, an' recliners in living rooms is where cats sleep. you guys won't let us sleep in yer bed, so how come he gets to sleep in ours???
M: Mostly because he pays for the bed AND the recliner, you ingrate. It wouldn't be anything at all to you to move to the other recliner. I see you sleeping willy-nilly in all the chairs in the living room all the time. What difference does it make which one you sleep in?
n: the same difference it makes to dad, i guess. it's where i WANNA sleep.
M: Just hush your pert mouth, buster. In his case, that recliner is molded to his butt and it's more comfy. Your butt doesn't care where it's parked. Besides, you guys don't know what cold really is. Look at these pictures from Chicago--it's so cold that the birdies have to leave for warmer climates before their houses fill up with snow, and even the trees have to wear blankets!! 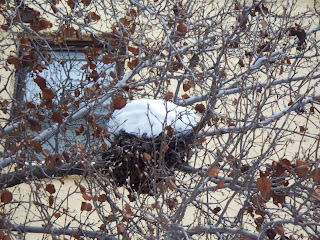 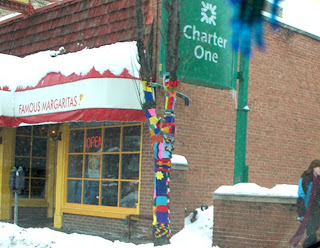