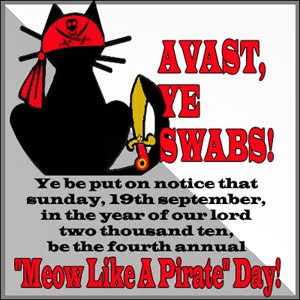 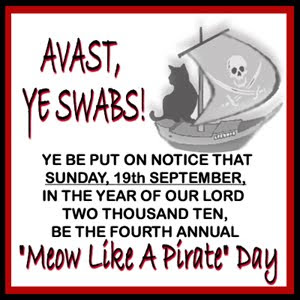 Our wunnerful Miss Ann, of Zoolatry, has provided the beyond-pawesome badges fur you to display on yer bloggies in support of Meow Like A Pirate Day!! Please snag one (or bofe) an' fly them proudly in yer sidebar!!
THANK YOU, MISS ANN!!!!
Posted by Meowers from Missouri at 8:05 AM 8 comments:

ye be put on notice that
sunday, 19th september,
in the year of our lord two thousand ten,
be the fourth annual
"Meow Like a Pirate" Day.

this day (MLAP) were instituted just after a time o' sadness an' woe in the cat blogosphere when we all needed to improve our spirits a bit by cuttin' loose an' haffin' oursels a wee bit o' holiday. it seems that once again, troubles an' sorrow has beset our little community an' we feels in need o' some jollity an' tuna joose!

ye can look back in the meowers' archive here, here (an' here, an' here--three parts!), an' here to get an idea of how we rolls . . . er, sails on such adventures. many fine kitties has joined the crew o'the cat o'nine tails, an' many more has sailed their own sleek vessels o'er the boundin' main in search o' treasure an' treats. we be a flotilla that commands respect an' temptayshuns at efurry port o'call!!

indeed, ye need no seafarin' experience to sail wif us--our doughty crew will lick ye into shape in a trice. if ye sails yer own vessel, ye need only rondyvoo wif us on the appointed day. if ye should answer a sirene call an' sail off t'seek yer own way, just remember t'be kind enuff to share yer ship's log wif us on yer bloggie!!

Posted by Meowers from Missouri at 6:00 AM 18 comments:

WARNING--NOT FOR KITTENS OR THE FAINT OF HART!!
THE TERROR MOUNTS!!!!
VISHUS STEALTH DEERS!!! 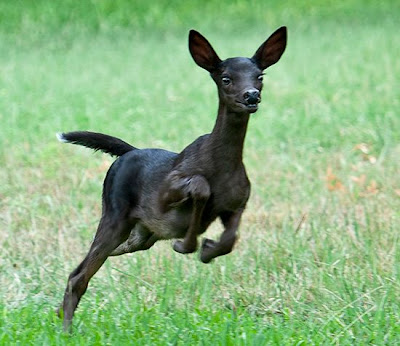 if you kittehs are out on patrol in the evening, don't be lulled into a false sense of security because all the pictures of vishus deers you've seen haf been in daylight! be smart, be wary, be jus' plum scairt!!
above is a picture taken at a TOP SECRET VD TRAINING CAMP where we see a nighttime camelflazh, er... cammaphl, er ... disguised vd galloping on its pointy, sharp hoofs after a stuffed decoy kitteh. look at its scary, blazing eyes, locked onto their targets!! he kin prolly see inna dark!!!! see its terrible teefs? they're so big, it can't even close its mouf all the way!! an' notice that the horrible stabbing prongs on its head are. not. visible!! this vd is operating in SUPER-STEALTH MODE!
this is quite a young vd, so they must be a newly-developed, genetically engineered breed--who knows what other drefful traits they are developing?? fangs? ahhhhhhh!! run away! run away!!
Posted by Meowers from Missouri at 6:00 AM 10 comments: 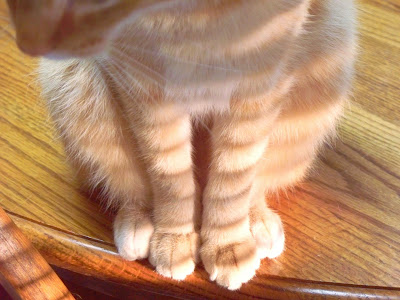 some is more stripey than others!
Posted by Meowers from Missouri at 6:00 AM 8 comments: 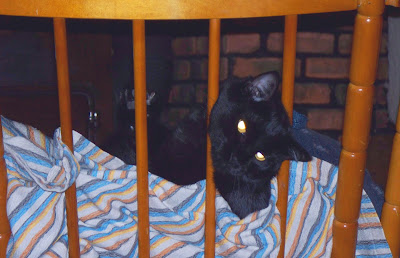 this is where they end up!!
iggy's story: i was vulturin' on toppa mom's linen closet an' jumped down inta the sink an' knocked off all her eye meddysin drops anna dambrowndawg scarfed one up an' mom hadda get outta the shower to go smack her onna head to make her let go an' then go soak the bottle in alcohol to get the dawg germs offa it.
so you kitties out there, don't knock stuff offa the counters, or you could end up like me, on a rude pallet inna rustic jail, wif yer mom playin' judge-jury-an-jailer!! (an' i darn sure ain't tellin' her about scratchin' my gums on her toothbrush!! )
Posted by Meowers from Missouri at 9:39 AM 10 comments: