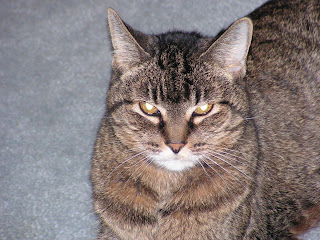 (our auntie denise and uncle rich say about their kitty, magic muffin, who went to the bridge on 4/26/07:)

She was special, found on a snowy day in November, barely 3 weeks old, looking for warmth, when I drove into the parking lot for work, hopping on my car hood and a voice that could be heard a block away. She was full of worms, had fleas and bronchitis so bad we didn't think she would make it. She was all of 1.5 lbs. We fed her by hand around the clock, popped her in a basket with an electric blanket, and prayed. She was also a devil, the feral in her never left and every spring and fall she would caterwaul at night and go pee where ever her little spirit took her in the house. She loved to play with her dog-brothers Avery, Sparky and Harrison, she would tackle them with her front paws and they would play her game by falling over and roll around with her, like wrestlers from the WB RAW. She has two other kitten sisters, Erin and Merlin, and it was a tough sell at first with each of them as they joined the family, but she accepted them and kept her place as the Princess Pee, HRH and they acquiesced to her.

She will always be in our hearts, and we know she is free and happy now and is with her other brothers and sisters and friends who left for the bridge before her.

(meowers' note: there are two posts about magic here, please scroll down to see them the second one)
Posted by Meowers from Missouri at 5:15 AM 14 comments:

in memory of our cousin, magic 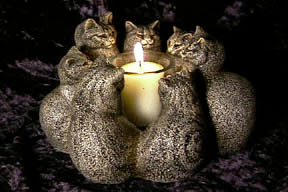 we nefur met our cousin magic, 'cause she lived fur away in illinois. but we know that she was a Good Kitty, and furry much loved.

on a cold november day 19 years ago, our auntie denise found her sitting on the hood of the car, trying to keep warm. so magic got to come inside and join The Zoo, where she became the old, wise kitty that all the critters (an' there are a buncha them) looked up to. she is sorely missed, and never to be replaced in their hearts.

however, guess what?? two tiny little feral boys (jupiter and mars) were being brought to the v-e-t just as auntie and uncle were leaving after magic's trip to the bridge. they are even now waiting at the v-e-t's office to get old enough to join The Zoo. these little guys won't replace magic, but it seems just a little "magical" to us how those two little lives came close enough for auntie denise an' uncle rich to pull them into their orbit just as magic was leaving. maybe magic called to them, knowing they needed a peaceful, loving furefurr home. we wish them all long, healthy lives together! l'chaim!

and shalom to the hearts of all who miss sweet magic. 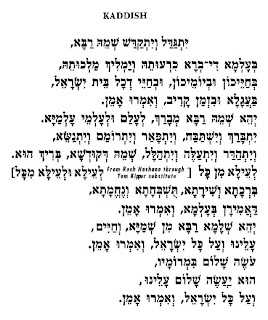 Glorified and sanctified be God's great name throughout the world which He has created according to His will.

May He establish His kingdom in your lifetime and during your days, and within the life of the entire House of Israel, speedily and soon; and say, Amen.

May His great name be blessed forever and to all eternity.

Blessed and praised, glorified and exalted, extolled and honored, adored and lauded be the name of the Holy One, blessed be He, beyond all the blessings and hymns, praises and consolations that are ever spoken in the world; and say, Amen.

May there be abundant peace from heaven, and life, for us and for all Israel; and say, Amen.

He who creates peace in His celestial heights, may He create peace for us and for all Israel; and say, Amen.
Posted by Meowers from Missouri at 4:10 AM 3 comments: 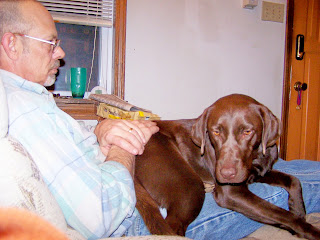 80-lb. cocoa thinks she is a lapdawg. now THAT's wacky!
that's a waste of three perfectly good cat-spaces!!
Posted by Meowers from Missouri at 9:59 AM 11 comments:

update on our furriend, scooter
scooter lives at the best friends animal sanctuary. his picture is in the right hand column of our bloggie; if you clicks on his picture, you can read about how he came to the sanctuary. we sponsors him efurry month, 'cause we likes his spirit and purrsonality! he doesn't know he's handicapped, or if he does, he sure doesn't let it bother him! mom would gladly drive alla way to utah to 'dopt him but can't, since coco-cocoa wouldn't play fair wif him. (prolly neither would ed, an' xing would hissssss & scare him). he's prolly better off where he is, meetin' an' greetin' lotsa folks! anyway . . .

last saturday, we gots a email telling 'bout how he's doing these days, an' thank bast, he's doing great. it feels SO furry good to know that we are helping anofur kitty have the safe home an' lovin' care he needs if he can't live wif us.

if you don't already, whyn'tcha do the same for some down-on-their-luck kitty? you'll be glad, an' so will they!
Posted by Meowers from Missouri at 6:15 AM 6 comments:

please vote for my movee!

it is the most romantical movee efurr,
and stars my heart-throb, the lovely miss midnight.
it is called "cast away on a sea of love".

thank you!!! sir edmund percival hillary
Posted by Meowers from Missouri at 10:11 AM 1 comment: 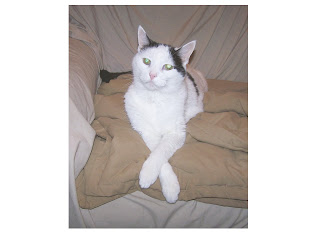 mom allus sez, "the older the violin, the sweeter the music!"
Posted by Meowers from Missouri at 6:17 AM 4 comments: