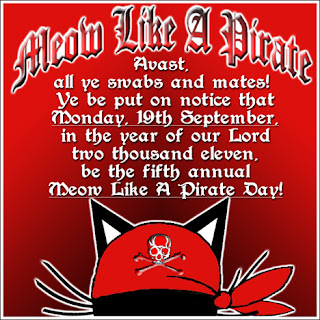 meYARRRRR! know ye all by these presents that Monday, 19th September 2011, be MEOW LIKE A PIRATE DAY! this sellybration come about thus: it had been a dark an' sad CB summer in 2007 (summat like these past few weeks). one day in august, our furry own shy an' retirin' Nelson John LaPurr were cruisin' the innernets, an' noticed that the hoomin beans were whoopin' an' hollerin' an' carryin' on quite some about th' 19th day. this be how it started fur the beans. he bethought him o' how a nice sea voyage would be a fine distraction fur us all an' perhaps lift some o'th' sorrow what had been anchorin' our hearts in davy jones's front garden--so he plucked up his courage an' became Cap'n Nels the Cranky an' invented MLAP!

ye kin spy our other past avventures, too: 2008 (a three-parter when the scribe just plumb run off at the jaws) here and here and here! 2009 here, an' 2010 here. aye, an' surely ye kin search ofur kitties' bloggies fur the word "pirate" an' turn up some bonnie treasures!! be ye not dismayed, howsomefurr, if yer abilities run not to the smithin' o' words--ye can sellybrate wif us an' a goodly chunk o'th' CB by doin' enny or all o' these below--or share somethin' wunnerful o' yer OWN invention!
we hopes to see ye an' yer bloggies ship-shape an' bristol fashion on the 19th, so look to sharpenin' yer weapons an' plannin' yer brave deeds! there's tuna-juice aplenty fer them what sails wif us that day!

(we be truly indebted to the good mistress ann o' zoolatry fur the fine graphic above!! mistress ann haf emailed out various sizes o' it, so post it in yer sidebar. if ye havena got it, email us an' we'll send it along.)
Posted by Meowers from Missouri at 6:00 AM 7 comments: 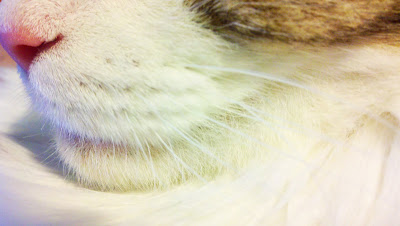 here's a close-up of ed's (thankfully unfried) left whisker hump.
we fink it is furry manly, as well as swave an' deboner!
Posted by Meowers from Missouri at 9:06 AM 13 comments: 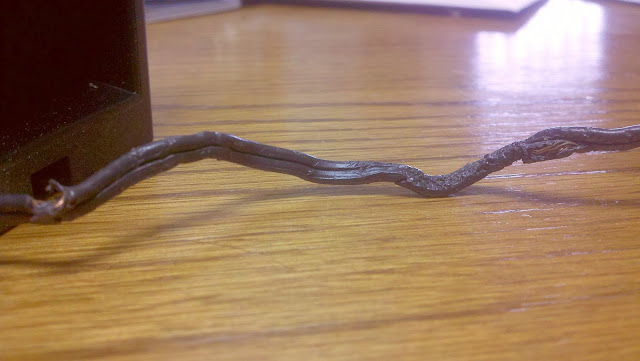 we haf sed it befur:  edmund is a plastic-head an' he reely loves electric cords. mommer thinks it's the scent of the petroleum products (plasticizers) that draws him. he loves plastic shoppin' bags an' he even ate the big power cord from the laser printer some years ago. mom an' dad pretty much try to hide the cords by tuckin' 'em down behint stuff, or puttin' 'em outta his reach, but once in a while one gets forgot.

this is what he did last week (go ahead an' biggify to get the full effect). it's a good thing that daddy woked up to make coffees when he did. the back room where this lectric tool battery charger sat had a layer of nasty-smellin' smoke floatin' up at the ceilin'. it smelled awful an' we hollered an' hollered an' hollered at him to get up, but he kep' hollerin' back SHUT THE ____ UP like he usually does acause he thought we wanted to be fed, an' he knew mommer had already fed us an' he thought we were tryin' to wangle second helpins. when he DID finely get up, you can't imagine how quick he hopped around, feelin' the wall fur heat, runnin' outside to see if there was smoke an' flame, runnin' up the attic stairs to look for danger, whippin' open windows, turnin' on the attic fan, an' tarnishin' the welkin all the while.

inna mean time, ed sat calmly an' watched all the activity with his usual mild detachment. oncet upon a time, miss ginger an' mr gary an' mommer an' dad were sittin' around the kitchen table, tryin' to describe us cats (their four an' us) each wif just one word. mommer decided that "bemused" fit edmund the best, since he just allus seems vaguely surprised an' slightly disconnected from reality (except when whippin' the snot outta some kitteh who has disturbed his bemusement). hmmmm ... "disconnected". izzn't that what happens to electric cords? honesly, we dunno why he hasn't been disconnected pernamently, an' we tries to guard against it; does enny of you cats out there haff this prollem? what does yer beans do about it?

NB:  when mom got up a little while afters, the smokes was gone but the smell still lingered. she pried open ed's mouf to see if there was enny ouchies, but there was nary a one. she sed, "well, i allus believed the lord looks out fur drunks an' fools--an' i guess i know which one YOU are, edmundo."