this is my bestest sleepin' place! My Mama was going to post my picture here, but she got confusticated by her camra an' akshully took my video. it isn't very long, but you get the idea how comfy this sun puddle is!
Posted by Meowers from Missouri at 6:00 AM 7 comments:

holy bast! whut was that??? 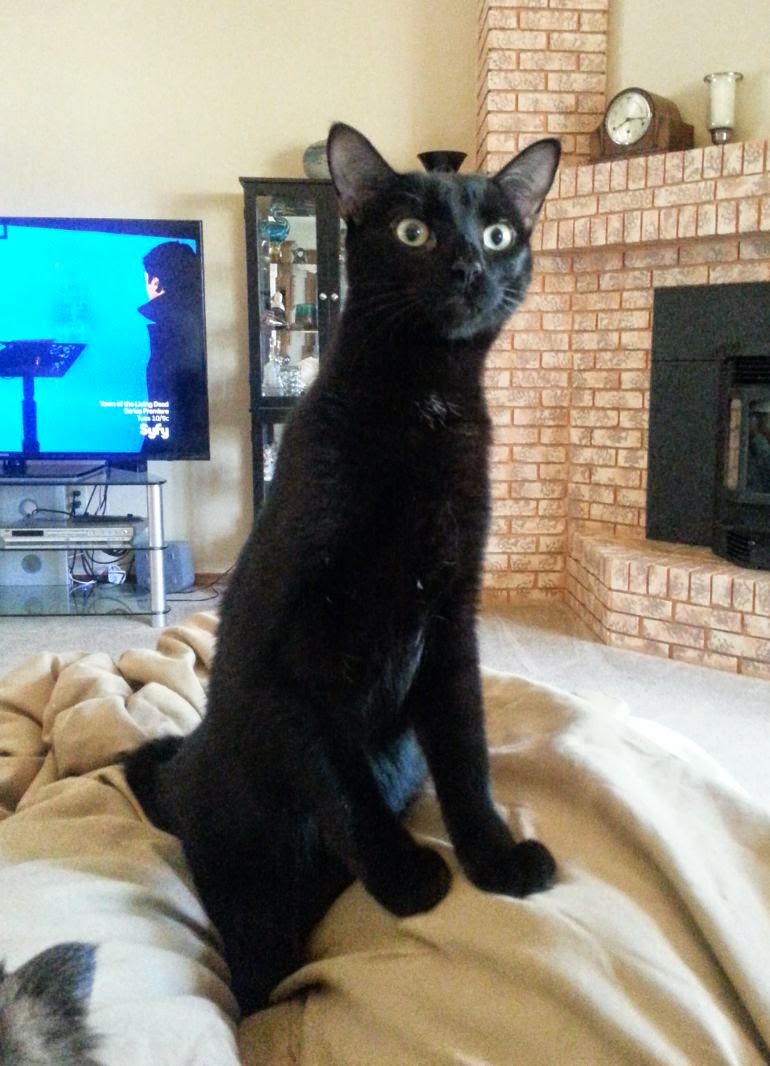 it is furry, furry windy, maybe windier than it has efur been since we been inna new house, an' it was whisslin' a tune out onna catio. dammitjim couldn't figger out what was makin' the noise, an' we din't tell him. we're just gonna let him werry!
Posted by Meowers from Missouri at 6:00 AM 7 comments: dammit speaks: it gotted pretty dadgum cold ofur the weekend, so dad decided it was time to gif the new warmin' box a test. he called it a trial by fire an' then laffed to hisself. mommer snickered. we din't get it. he tole us it was called a "pellet stove" an' it would warm us as good as the brown metal bockus at the ole house. he carried a coupla buckets in frum the room where the cars liff, an' they were fulla little pellets fer sure (the buckets, not the cars). we fink they looks a lot like the pellets like our bunny furriends eats, but he sez no, they is really wood. he is furry happy about that; all he hasta do to warm us up now is carry a bucket, not saw down, section, quarter, load, unload, stack, an' carry in logs. he sez he is wayyyyyyy too old for that *bad werd*.

anyway, he poured the bucketsful inna top of the metal bockus, closed the lid, an' pushed a button onna side, an' then ... nuthin'. he sed we'd hafta wait until it got cold enuf fur the thermbostad to click on, but by bast, it was plenty cold enuf already--edmund was even thinkin' about fluffin' up igmu fur a bed (an' there is no love lost betweenst them two lately). but finely, we heared the rattle of little things fallin' down inna bockus, an' in a minnit we could see through the glass that the whole inside was fulla smokes (which we nefur seen at the ole house acept those two times the chimbley backed up). an' then it bursted into flames an' throwed sparks like the boomies inna hot month!!

igmu was behint the sofa, an' i was onna sofa wif the dbd, an' nitro was on mommer's lap. but ed was takin' a nap onna floor in frunta the noisy picture bockus, an' he din't pay no tenshun at all until that fire started wif a "WHOOF". then he sat up an' stared. an' stared. an' stared. then he licked his butt an' ranned down the hall past the baffroom, an' we din't see him no more fur a long while. nitro flicked his ears a time or two, but he din't care nuthin' about it, an' neifur did the rest of us. as long as we is warm, we don't care where it comes frum. in fact, the bricks next to it might just be prime real estate when it gets REALLY cold outside!!
Posted by Meowers from Missouri at 6:00 AM 5 comments: