does you all member the dismal, wretched ice storm we had inna ozarks last january? some folks has put the remains to good use: 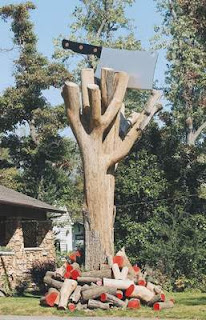 said one of the people involved: " . . . the total piece is not finished. [The artists] still have to paint the tips of the cut limbs and varnish the outer surface of the entire tree. The meat cleaver is not heavy and will not fly out of the tree . . . . It is made of welded steel for structure and filled with fiberglass. It is bolted to four thick limbs and is anchored with cables that are not obvious to a passing viewer/car. As for other seasons that pass by, this large environmental sculpture may take on some 'fun decorations' . . . maybe some lights at Christmas. Who knows? This sculpture is for people who have a great sense of humor, imagination and whimsy in their lives."

that's OUR kind of art! sorta macabre, but hurts no creature.
Posted by Meowers from Missouri at 8:59 AM 13 comments:

we begs pardon of anyone who is tender an' gentle an' well-bred. they will be offended by our coarse langwidge and bloody thoughts in this post, but we gots to say it or burst. please don't read further if you don't know the 4-letter word for intercourse that isn't "talk".

this is in regard to the recent posting on the cat blogosphere re: a report of an "artist" who starved a woofie to death as an "art piece". allow us to say, WHAT THE F**K?!?!? there are already millions too many critters dying efurry year from neglect--did there need to be one more?? deliberately????

our mom cried for half a hour an' hurled a hairball wifout no hairs in it, after she read the report an' signed the petition. she hadda go home from work early acause she was raging mad by then. she hollered quite some. we hasn't seen her this mad, efurr. an' when she splained why, we got even madder. we may may be housecats, but there are thousands an' hunnerts of thousands of killers in our collective kitty-consciousness, an' by bast, they're stirrin'! nunna them efurr saw any need to murder somethin' just to watch it die.

we wanna find this guy an' lock him inna box an' let him starve. nuts to that "turn the other cheek" stuff for . . . we almost said "beans" but this ain't no human . . . creeps like this. we just pure an' simple want him dead, an' we ain't sorry for sayin' it. that woofie din't do nuthin' to deserve that death, but the "artist" DID!

we knows we prolly won't find him to lock him up an' starve him, but we puts the curse o' sekhmet (Avenger of Wrongs, oh, Great Scarlet Lady!) on him. she'll eat his liver. wifout fava beans or chianti.
we is ROYALLY PISSED OFF and want to go to war. biting, hissing, slicing, rending, shredding . . . the furniture better look out tonight!!!
(mom's takin' away the puter now, acause she's afurraid we're gonna start wallering each ofurr around if we keeps on rantin' . . .)
Posted by Meowers from Missouri at 6:41 PM 10 comments: