we is gonna be 10-10 an' onna side (which means--if you ain't old enough to member--in CB Radio parlance that we's gonna be layin' out, listenin' but not postin' much for a few days).

mom hasta go to chicago tomorrow mornin' acause her daddy's hafin' eye surgery fur his clawcoma (pressure's 40+ in each eye, should be 20 or less), an' to haf a catarak removed. we dunno why anybean would want anything "claw" or "cat" removed, but the doctor sez it's gotta get done so grampa kin maybe see a little again. he's 95 an' furry creaky, so we hopes you will all purr an' purrray fur him an' his surgeon & team. an' fur gramma, who's 91 an' don't take stuff like this furry well anymore. an' fur mom, so she can stay awake for the whole trip; that would be good. she's drivin' by herself acause daddy's doin' inventory an' boybean can't get loose of work.

daddy don't know nuffin' 'bout birthin' no blogposts, so unless we gets the chance to consult wif mom by cellphone an' she can find a public computer, we'll be quiet but wif efurry one of you in spirit. we'll be purrin' an' purrrayin' fur alla our furriends for whatefur their needs might be. we loves you all!!

Posted by Meowers from Missouri at 5:28 PM 12 comments:

it turned mighty cold the day mom & dad finally deigned to remember that they had starving, unhappy kitties at home. (mom here: yeah, we were gone all of a day and a half!!!) we were furry, furry freezing!! so dad built a fire inna woodstove an' slowly we thawed out. but on sunday afternoon, when we were sposed to be pleasantly drowsy from that wunnerful heat, he let the fire die down--to "dip ashes", he said. it started to get chilly again! we fink he just wanted ta remind us that he's necessary. well, we showed him. MOM's the necessary one!! 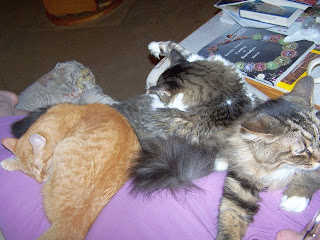 the mystery of who got into the chair first back when we posted hell has frozen ofur is solved. ed was there furst; then xing climbed up an' sat on him. evidently he was comfy enough not to protest, an' she nefer even hissed at him. then nitro climbed up, an' she din't hiss at him, either. we don't fink she's "mellowing", she's just more secure when mom's there. that, an' she knows that mom'll pop her onna nose if she hisses when we ain't threatening;-) 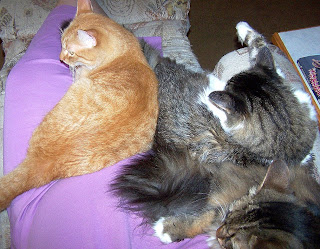 here, cocoa is saying, "please, can't i get on yer lap, too?" poor woofie; she was furry traumatized while they were gone. she went to stay wif our bean brofur, but he don't live where he useta. he an' his kitty powder moved in wif his girlfriend leslie an' her two kitties (thomas an' karma), an' so it was a unfamiliar place an' had two strange kitties to deal wif. she hasn't even let daddy go potty by himself since they came home!! 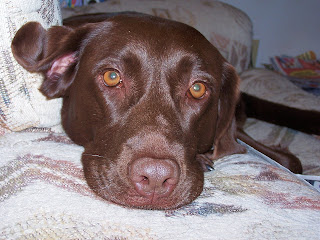 ahhhhh! comfy at last!! daddy sure loves her to let her do this acause she squishes all kindsa important stuff when she wiggles around to get comfy! 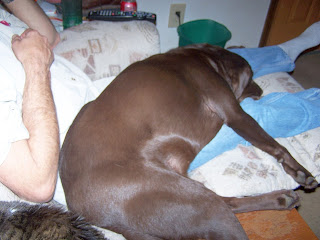 Posted by Meowers from Missouri at 5:00 AM 9 comments: