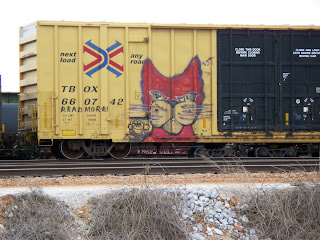 please read BOTH posts below this one. the vishus deer post (immediately below) is correct fur monday.

howsomefurr, even though she marked the "mouses?" post for posting on tuesday, by golly, it posted last night. so we is sorry to say, there will be no other post on tuesday.

grrrrr.
Posted by Meowers from Missouri at 7:12 AM 2 comments: 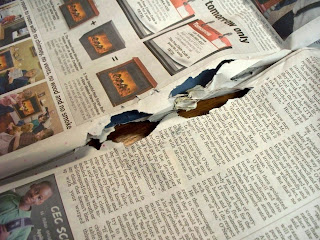 NO! it's MIGHTY-MOUF--a.k.a. igmu!
dad lef' the noospaper onna kitchen table this morning, an' moo chewed lotsa holes innit. mostly along the folded edge. mom told him that the time for makin' paper snowflakes was past, but he just kept on shreddin'. she hadda flap him wif anofur section to get him to stop. yes, kitty-furriends, our iggy is back to normal.
Posted by Meowers from Missouri at 6:00 AM 7 comments: 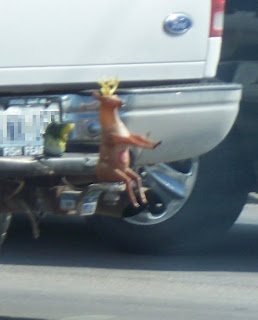 a new menace has been spotted on the streets of springfield--beware!! they could be in your town, too!!

the vishus deers haf developed tiny little "mini-me" deers!! they are only about the size of a regl'ar kitty, an' we figgers they're usin' 'em fur makin' kitties think that since they're so much smaller than reg'lar deers, the kitties can whip up on 'em. but then they lure the kitties into the bushes, where the really big, REALLY VISHUS deers will skewer 'em!

here is one perched onna hunter's truck, hitchin' a ride to a house where there's unsuspectin' kitties--he smelled 'em onna truck tires, an' figgered he'd just take advantage of the transportation so he wouldn't hafta waste his energy stalkin' 'em.

an' most chillin' of all, he was WAVIN' wif his forelegs at the li'l children inna car behind him! just like he was somethin' small an' cute that they might beg their mamas an' daddies to buy for them 'cause they wanna take 'em home fur a pet!! what if those li'l children had kitties, too???? oh, the HORROR!!
Posted by Meowers from Missouri at 3:32 PM 8 comments: