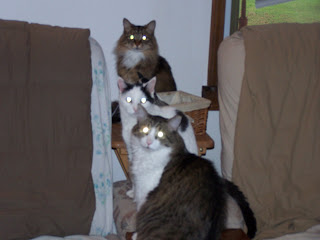 we's tunin' up our lazer eyes in case any vishus deers saunter by!
(nitro was busy bein' washed by cocoa, so he missed practice. we gave him detention an' he hasta practice twice tomorrow!)
Posted by Meowers from Missouri at 9:35 AM 13 comments:

how i gots my name - xingxing

henry helton tagged us for this meme - thanks, henry!

Xing Lu Pierce: one cold febuary day, My Daddy an' My Grandaddy were driving in the big red machine to take some tree arms to the place where the city of springfield lets beans leave wood an' leafs. out in the wild somewhere where there were no houses, only open spaces wif fences, they saw something blue at the edge of the road. when they got closer, they saw it was a zip-up bag that cold drinks rest in, an' it looked furry new. so My Daddy stopped an' grabbed the handle an' swung it up into the big box on the back of the machine where the sticks were. he thought maybe it would be good to take along on the trips where he goes to visit fishes.

after they pulled out alla sticks from the box at the wood an' leaf place, he thought maybe he oughta see why the bag seemed a little heavy. so he unzipped it, an' out popped my little head! he unzipped some more, an' i leaped into his arms an' hid my head unner his arm. i was furry scared an' he hugged me tight (which i like) an' 'tected me. My Daddy is my hero!! i don't 'member how i got where he found me, an' i don't 'member much before that time. it seems i has been here always.

when he got back to town, i met My Mommy. she an' My Daddy were big fans of a story called firefly on the living room picture box . so she named me xing lu, which somebody told her means "fortunate jade" in chinese bean language. i was certainly furry fortunate, an' my eyes is as green as the pretty stone called jade.

i love My Mommy and My Daddy, an' ofurr beans, too--all ofurr beans. even the woofies. but oh, gosh, i wish those boycats would stay on the desert island where we went on the pirate cruise! My Mommy thinks i maybe nefur saw ofurr cats before i came to them, only beans an' woofies who were nice. could be, but you can't prove it by me! ;-)
Posted by Meowers from Missouri at 6:03 AM 9 comments: 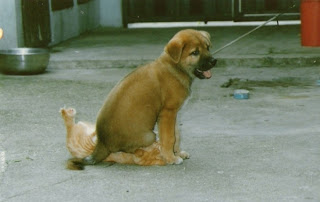 Posted by Meowers from Missouri at 6:00 AM 14 comments:

how i gots my name - nitro

henry helton tagged us for this meme - thanks, henry!

Nitro S Pierce: when the beanboy's girlfriend's mom found me by the gas station dumpster one cold november day, i nefurr dreamed i would end up in such a nice place like i am now. i din't even know what a "nice place" was. it was rainy an' i was pretty wretched, so i din't kick or bite when she picked me up. she thought i would be a nice friend for her woofie, but it didn't turn out that way! he hated me on sight, an' the feelin' was mutual!!

so she gave me to the beangirl (who lived with the beanboy). they each had a kitty, an' i was pretty feisty an' the ofurr kitties was furry cowardy. finally, the youngbeans couldn't take the constant ruckus of me beatin' up on the kitties anymore, so i came to live with mom and dad. not all the kitties here are wild about me either, 'cause they just can't keep up with me!!! but mom an' dad didn't give up on me, an' i am home furefurr now!! i am daddy's special boy!

the boy & girl had been calling me "little red", but mom allowed as how that just wasn't a fit name for a kitty who had as much purrrsonality as i do. so dad named me for his (orangey-red) "Nitro" bass boat, which has a lotta zip an' pep like me. it smells of yummy fishes, but he won't efurr take me along to meet them in purrrson!

mom gave me my middle initial, "S-with-no-period-just-like-harry-truman", an' she says in my case, it stands for "stubborn". i prefer to think of myself as dedicated to a cause. usually, the cause is getting into something i shouldn't, but that comes wif my firey personality. i knows no fear, not even the jaws of the cocoa-woof!

an' i tack on the "pierce" part myownself, 'cause i'm glad i'm part of the fambly! (besides, the name sounds unbalanced wifout a last name!)

. . . . xingxing's name story will happen on thursday, after a brief interruption for Wordless Wednesday!
Posted by Meowers from Missouri at 6:13 AM 10 comments:

henry helton tagged us for this meme--thanks, henry!

(Sir) Edmund Percival Hillary: i was one of six little kitties born to a slick black kittymama (i don't remember her people-given name, but i have always thought of her as "food/smell/good/warm"). my kittydaddy was probably the fluffy grey travelin' man that used to hang around with her. when kittymama was round as a punkin an' we were ready to make our way into the world, nice beans (a man and lady my mom worked with) let her come in the house so we could be born safely. they found nice homes for us. they gave us names for while we lived there, and i was called "piglet"; i had a sibling called "cow" who was marked like me but had short furs instead of long.

the day i was born was my (bean) mom's birthday, so i was very tickled to go home wif her. she waited a long eight weeks before taking me to my furefurr home, so i musta been worth waitin' for! there were lotsa big grown-up kitties at my new home, an' i was scared 'cause i was still furry little. to stay as far away from them as i could, i allus climbed up to the highest place i could get, which lotsa times was mom's head. she figgered that like the brave bean mountain climber, i climbed "'cause it was there," an' that's how i gots my name an' came to live here.

peeyes: sometimes i has what the ofurr kitties call delusions, an' think an' act like a knight in armour, like the kind that's called "sir". i don't consider them delusions; i prefer to think i'm channelling a brave an' chivalrous bean of olden times. mom's allus readin' that kind of story, an' has friends who dress up like lords an' ladies, so chivalry has allus been part of my world. the ofurr kitties tease, but mom thinks that it is nice to be a little politer an' gallant sometimes (although it was lots of fun being a pirate for a while)!
Posted by Meowers from Missouri at 6:01 AM 13 comments: