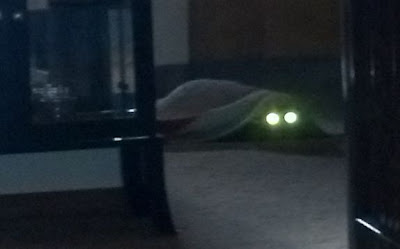 nitro:  uhhh, mommer? you know how yer allus sayin', "snug as a bug inna rug"? well, i just took a tail-count, an' xingie's inner rooms, ed's onna sofa, an' iggy's in dad's chair. so just how big do those bugs get?
Posted by Meowers from Missouri at 6:00 AM 3 comments:

we hadded anofur post lined up fer today, but this seemed more impawtent to say. of all the cats what liffed innis house when 9-11 happened, only edmund is left. but he has told all of us how he sat on mommer's lap at lunchtime while she watched the noisy picture box. how he knew she felt bad, so he bonked her an' purred loud an' she din't even notis. how he got all wet from her leaky eyes. how scairt he was when she started cryin' really hard. how he went an' hid (an' he's not proud of this) when she started wailin'.

he din't know. he couldn't know. kitties haffen't efur thunk about such a fing.

but after a few days, when she could talk about it wifout rainin', mommer splained to him that many, many souls had gone ofur the human bridge (an' prolly a lotta aminals, too) all at once because of other humans. by this time, she was good an' mad at those other humans, an' a lotta her werds were onna bad werd list. ed even learned some new ones. so when she ran outta bad werds an' hushed up fur a while, he finked about what happened until he unnerstood. an' then he finked some more, an' discussed it wif the ofur kitties. an' he has discussed it wif efurry kitty who has come to liff here since. we know if kitties really could take ofur the werld, nuffin' like this would efur happen. but, hey. we're kitties, an' wifout opposable thumbs, we ain't efur gonna be able to take ofur the werld. yeah, it hurts to admit that.

so what we KIN do is purr for those souls an' the souls they left behine. an' purr fur the souls that were brave an' heroical, somma who relif that drefful day ofur an' ofur in their minds an' bodies. an' yes, purr even fur those bad humans so they get smarter an' decide not to do stuff like that ennymore. an' purr that all humans finely realize that peacefulness is much more conducive to noms an' naps than fightfulness.

well, here it is, the start of our work week 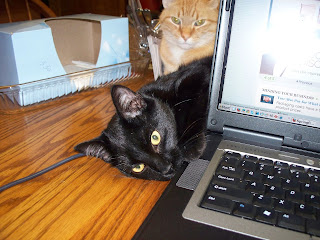 here we are, dictatin' anofur avventure to mommer. at least it's not one of HER avventures this time. we are werkin' on sum ideas fer Meow Like A Pirate Day, but she is kinda sickly today an' not punkchuratin' up to her usual quality. we all has mad spellin' skills, haffin' growed up inna ozarks an' been tootered by skeezix, but we dunno nuthin' 'bout no punkchuratin'. we hopes the lizzerd incident of a few days back hasn't affected her punkchurater. she allus tells us that you should put in punkchurashun when you breefe, but she sure wasn't breefin' good THAT day! we'll keep onner.

Posted by Meowers from Missouri at 6:00 AM 3 comments: