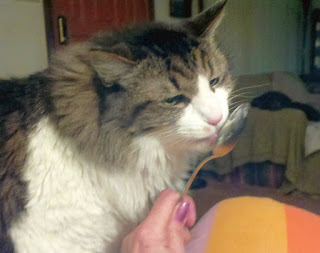 ahhhhh, the good life: niller ice cream!!
mom din't giff the ofur boys none, acause they already had chick-hen an' noodlers, so me an' the dbd got to share this ice cream spoon. later i heard the dbd mutter, "that ice cream tasted like catspit!" well, if you're not first in line, that could happen. heh.
Posted by Meowers from Missouri at 6:00 AM 16 comments: 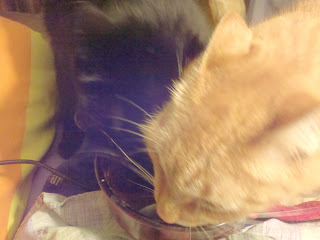 honest to bast! after i did all the huntin', trackin', stalkin' an' pouncin' i did to wrassle that lick-a-licious chick-hen an' noodlers bowl into submission, look whose fat head is mostly in it!!

at the first clink of the spoon in the bowl when my tongue touched it, igmu charged in frum the baffroom where he was playin' tub hockey wiff his sparkle wand an' helped hisself to MY kill!! he is the most obnoxshus little brofur efur. mom laffs an' sez i am a black kettle or sumthin'.

(which i don' unnerstan what that has to do wiff the sitchooashun ennyway, an' also ennyway, it's igmu who's the BLACK one, in case that excaped yer notice, MOM!)
Posted by Meowers from Missouri at 6:00 AM 10 comments: 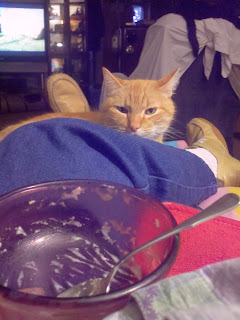