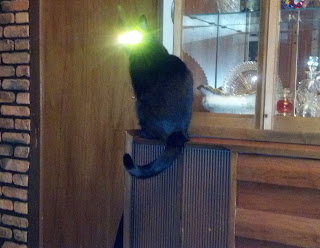 this is igmu after he founded out he couldn't open the door to xing's suite enny more. talk about hissin' off the devil!!! mommer's got two smokin' holes inner forehead now!
Posted by Meowers from Missouri at 6:00 AM 9 comments: 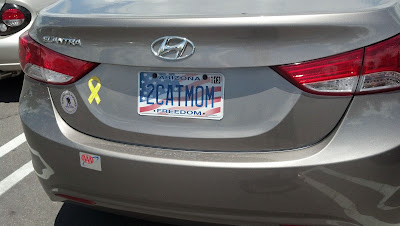 Posted by Meowers from Missouri at 6:00 AM 3 comments:

even when it ain't YOU that's sharin' YOUR goodies! at least that's whut mommer tole us.

last munf, mommer wented to arizona to bisit her mommer an' sistur an' attend her sistur's granddaughter's weddin'. efurrythin' was lovely an' she hadda great time, an' was furry happy to spend efurry evenin' playin' scrabble wif her mommer, even though her mommer (age 96) whupped her butt most efurry time. gramma don't get out much, so mommer tooked her to lunch an' fur a ride through a cactus

one day, she wented to a little town souf of tucson called tubac, which hafs lotsa stores wif pretty jools an' statchers an' clo'es to buy. many of the stores were closed acause mostly it's a place where turists go, an' most sane beans don't do turist in arizona in august acause it's so hot (but it's a dry heat). one place she wanted to go was closed, so she sat fur a minnit onna bench outsidea it, inna shade, an' pretty soon there was a familiar feelin' onner ankles. a ornich kitteh was sleekin' up to her an' stickin' his nose inner purse!! 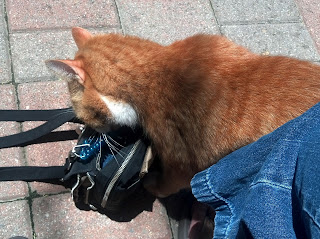 just befur she tooked her rest, she had stopped inna herb shop an' gotted us a sooveneer: a packet of organically growed NIP! boyhowdy, did he haf her number! so she opened the bag an' giffed him a good snootful onna pavement. 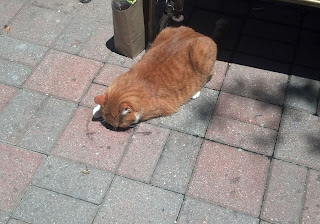 he was FURRY appreciative. he faceplanted in classic style an' rubbed his face innit. 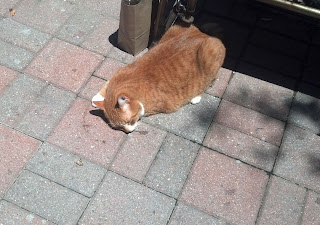 inna end, all there was lefted was his drool. we'd say he had a pretty good time. 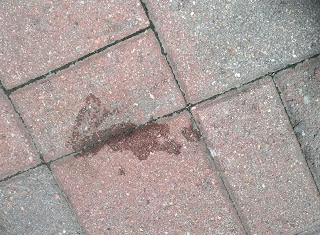 an' we can attest that that was some primo shi uhhhhhh ... nip. we has enjoyed efurry flake an' flower, an' don't mind at all that she shared some wif him. we wishes EFURRYCAT an' EFURRYBEAN could feel like that alla time!
Posted by Meowers from Missouri at 6:00 AM 5 comments: