it's me, meower mom! meower dad and i are in chicago, visiting relatives, so we turned the computer off at home, lest it get fried in an electrical storm. i see that a couple of the boycats have been tagged for memes, so as soon as i get home on monday night, i'll get the system fired up (if it's not storming!) and let them catch up on the kitty blogosphere. hope you're all having a great time, wherever you are; we are!!!
Posted by Meowers from Missouri at 5:33 PM 5 comments:

we THOUGHT something was funny . . .

an' we don't mean "laffin' an' laffin'" funny. mom came home smelling furry strange last night. we sniffed an' sniffed, an' it wasn't anycat WE know. now we know why!

it's a puppy--a baby woofie! miss jennie, who works wif our mom, got a new puppy 'cause her house seemed so empty since little felix went to the bridge. he doesn't haf a name yet, but she's leanin' towards "jake". he is SO little!! we don't ordinarily post about woofies, but this guy is pretty cute. miss jennie sez he's 'spos'd to be a beagle & cocker mix. does that make him a coagle or a beaker?

nitro wants to make a playmate of him, but for "jake's" sake, we hope that doesn't happen! here are some pictures: 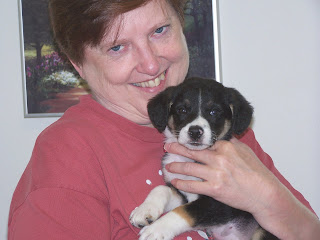 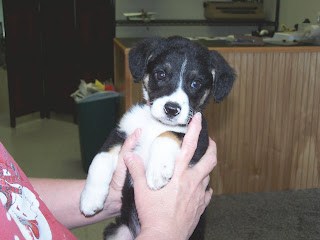 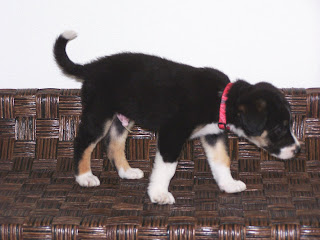 Posted by Meowers from Missouri at 2:00 PM 16 comments:

we missed our 10,000th poster!!! that seems like quite a milestone to us, an' if we'da had our heads screwed on straight, we'da had a present for that lucky kitty!! we looked back in our counter/tracking software to see if we could identify him/her/them at least by ISP, an' it was so long ago, they don't have it logged any more!! pfui!

so. howzabout we reckernize the 11,000th visitor? we will move the counter thingy up closer to the top of the page (that's why WE forgot about it), so you can see it better. an' if you are the 11,000th visitor to our site, just email us wif your snail mail address an' we'll send you something nice an' ozarkian!! or not ozarkian. depends on how we feel that day;-)

btw, mom an' dad are goin' to see our gramma an' granpa in chicago from the 10th through the 14th for both mother's day an' for their 65th anniversary. so we will prolly not be posting in that time, since mom usually shuts down the puter so it won't get blown up by a lectric storm while they're gone.
Posted by Meowers from Missouri at 8:51 AM 12 comments: