i gots a new bed! 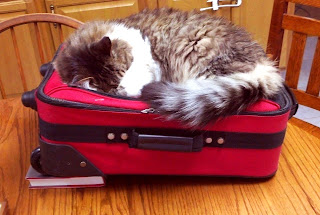 ed:  lookit my new bed! it's like sleepin' on air, an' just fits me perfeck. mommer was furry thoughty to leave it out where i could see it furst thing after my post-prandial nap this mornin'! she even raised the head part a lttle so's i wouldn't get no acid reflow frum my kibbles. she's a peach, that mommer.

nitro:  didja efur think that whenefur those soft boxes come out, the 'rents go away an' leaf us?

ed: yeah, but they nefur go wif only one; they usually haul three or four of 'em down frum the attic an' there's alot of washin' things an' gatherin' things an' hurry-hurry stuff, an' they ain't doin' enny of that. this is fur ME!

nitro: uhhh, it's all in yer head, dude; go back t'sleep.

tip-toe through the tuesday 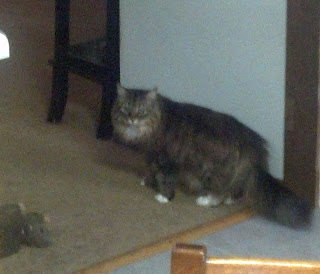 well. My Mama hadda take this picture furry fast, so it's blurry--but it ackshully is ME, Xing Xing, goin' frum the kitchen to the liffin' room. My Mama had locked up my rotten brofurs (an' the dbd, who I don't really mind) inna computer room, so I could come out from my suite to the rest of the house. I slinked around furry tenatifly for a while, because the whole place just REEKS of boycats, an' it was hard to belief that there weren't really there. but I told myself that My Mama wouldn't let me go anywheres it was dangerous, or let the boycats ambush me, so I finely came into the kitchen--there were food smells, but also boycat smells, because they were right behind the door behind My Mama. it was furry hard for me, but I was brave an' jumped up onna table an' mommer shared some cheese sammich wif me!! it was so delicious!!

then there was a thump-thump-thump onna door behind My Mama, an' that was enuf for me! I looked my thanks at her an' blinked luffin'ly, an' jumped down to go back to my rooms off the liffin' room. that's when she got this picture, an' then she came an' closed my door so the evil ones could come outta the jail.

that was pretty much all the adventure I needed fur the day; I napped all afternoon, an' din't even ask to come out an' sit on her lap after supper that night! but I'm glad I went--it's good to remind yerself sometimes just how brave you really are!
Posted by Meowers from Missouri at 6:00 AM 7 comments: 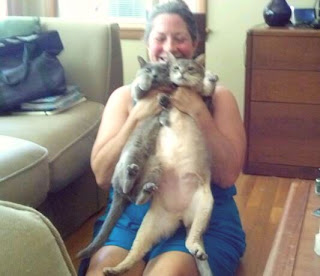 today we'd like to innerduce our mancat guest stars: tubby (left, blue burmese) an' the efur-busy getzger (blue abyssinian, right). holding them is our faverit human next to mommer & dad, an' also our faverit feed&water&scoop-when-the-rents-are-outta-town purrson, miss ginger. we knows that it looks like getz should be named tubby, but he wasn't allus plumpish. an' tubby looks awful short here, but he's nearly as long as getzger. miss ginger was demonstratin' how flexible (in body an' in spirit) their mencats are. she wallers 'em around somethin' awful, an' this was nuthin' compared to what come next. we're sorry there are no pictures of it, but mommer hadda put the camera down acause she was laffin' an' laffin'. so SHE had a good time, but we haff nuthin' to show fur it.

getzger (you haf seen him befur inna water-from-the-faucet video) is a furry busy cat who takes his house patrols an' snoopervisin' duties astreemly serious. no matter where you go (an' what you do), there he is. matter of fact, he is SO prompt, you can frequently trip ofur him before he gets there! he also is a garter-snake killer par excellence. whenefur he can make a tour of the backyard, he throws hisself into findin' an' killin' the emeny--why, just the day this picture was tooken, mommer narrowly avoided steppin' in snake chunks an' some cat-hurl fulla ribs in their liffin' room!

tubby is a lover, an' kin giff you concussions wif his headbonks when he really likes you. he luffs scritches unner his chin, an' if you is a ladybean, he will head straight for yer, ummmm, frontal appendages to cuddle up an' purrrrrrrrrrr. his eyes are kinda mesmerizin' : 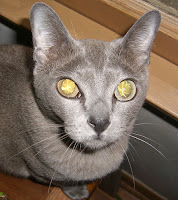 he hafs a condition called persistent pupillary membrane, which means the remnants of a fetal membrane din't atrophy around birth-time or shortly after, an' persists as li'l ropes of tissue crossing his pupils. his first name (at the cattery) was "astro" which is a greek werd for "star"--so he is really starry-eyed.

so now you haff faces to put wiff the names of kittehs we sometimes mention! they haf a furry fine fambly, an' haf two sisfurs (blue kitty an' sprinky) who may someday come outta hidin' long enuf fur mommer to take their pictures!
Posted by Meowers from Missouri at 6:00 AM 7 comments: