now they HAFTA respect me! 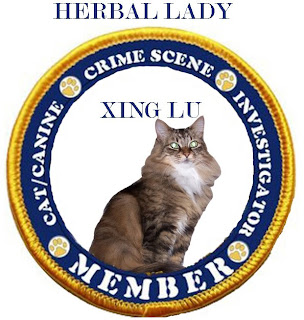 it's me, it's me, furriends!! xingxing!! i'm all excited 'cause i'm gonna be in the CCSI IV production that's comin' up--the Momomo Caper!! the talented an' lovely miss sassy sent me this beautyful badge to show that i'm part of it!! now those rotten boycat brofurs hafta admit that i really haf star-quality, that i'm not just a whiny girlcat, that i'm on my way to fame an' fortune. many, many, many thanks to Karl, Ruis, Sassy, Opus, Asta, & Momo for my big chance!!

(crisis averted--mom wonders, is this what "herbal lady" means?)
Posted by Meowers from Missouri at 6:30 AM 13 comments:

while mom was in chicago,

grampa had his eyes surgeried, an' the clawcoma pressure's back where it should be, so that's good. but we can't tell yet if the catarak operation did any good acause there's a 7-10 day healing time. mom's not so sure grampa's gonna get through that wifout troubles, acause he's sposdta wear a pirate patch, an' he keeps pullin' it off an' hidin' it in his pocket. so we is just hopin' he don't get no feckshuns. we fanks you all fur your kindly thoughts an' purrs an' purrrayers--they worked really good, acause it's hard to haf an uneventful operation on a bean who's 95 squillion naps old. an' they worked good on gramma, too, acause she din't freak out a lot about the whole deal. mom was almost more worried about that than about grampa!

an' while she was gone, we were each an' efurry one of us furry good, so she brought us goodies frum a furpersons' BOO-TEEK called scratch 'n' sniff (an' told us not to get useta such high-falutin' vittles). (well, they prolly won't let her back in there anyways, since she says she spent the whole time LOLin'.) cocoa went to the day hunting place wif dad efurry day, so she gots the t-shirt woofie cookie that's even gots frostin! the lamb & liver treats are fur anofur day.

we, of course, were our usual mild-mannered selfs, so we got the bonito flakes. but then we got inna fight ofur them when daddy opened the jar. we know why they went missin' at skeezix & mao's house!! we doesn't know what "herrings" are, but mom sez they're chewier than "earrings", so we fink we'll like them. we gets to try them tonight. 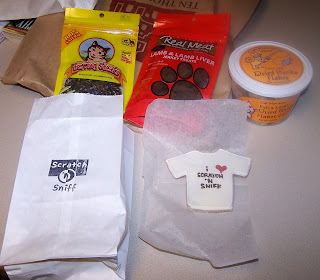 an' gramma gave mom this really kyoot purse for christmas (acause mom & dad prolly won't be able to visit her then). she allus finds really neat kitty stuff for mom even though she can't use the innernets to shop, so we guesses there must really BE a world outside our virtual one . . . ;-D 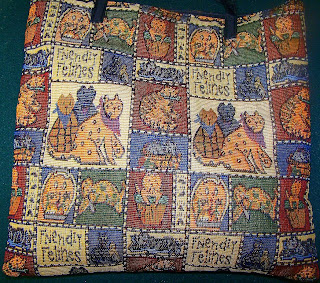 Posted by Meowers from Missouri at 5:00 AM 6 comments:

we is certainly purrin' an' purrrayin' fur our furriend moki!
what a brave kitty he is--matched only by the braveness of his mama.
they is a pair ordained by heaven.
PURRRRRRRR, PURRRRRRRR, PURRRRRRR, *soft rumbly grrrrrrrrrr*
Posted by Meowers from Missouri at 1:39 PM 1 comment: