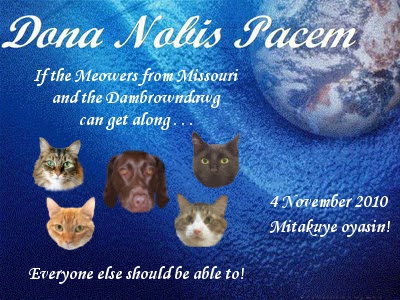 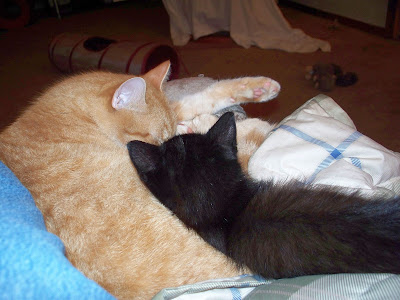 Posted by Meowers from Missouri at 8:30 AM 11 comments:

this is the mom speaking:

ok, i saw you boys over in that corner, whispering together. then you all sauntered to the kitchen table and one by one jumped up into your usual positions around my breakfast plate with the peanut butter sammich on it. then you, mr. instigator igmu sapa, reached over and smacked ed on the tail. as expected, he whirled around. then because no one was there, he sat back down--ON MY SAMMICH!!!! i know you all knew i wouldn't eat it after that.

my only question is, did you plan that together so that ed sitting on the sammich was the point all along? or did you younger boys tell him you were gonna do something else, then depended on him being confuzzled enough to forget to turn back around after iggy swatted him? we all know his logic has been "fuzzy" for years. i'm pretty sure it was the first choice; ed may be getting older, but i doubt that he's old enough to have forgotten which end eats the sammich and which end . . . well, you get the picture.

very clever, boys; very clever. but your cleverness got you no ill-gotten gains: the dbd got the whole sammich AND got to lick the plate where the peanut butter had squooshed out the sides of the bread after ed's ample arse landed on it. i don't even wanna know how ed's butt gets clean. keep it to yourselves.

me and the bad-cat bottle? we're gonna become best friends. we'll be watching you! ::points to eyes, points to cats::
Posted by Meowers from Missouri at 9:13 AM 12 comments: 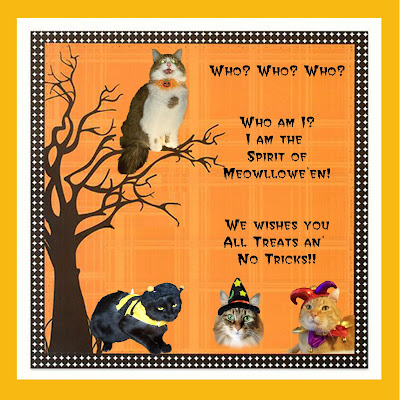 Posted by Meowers from Missouri at 6:00 AM 11 comments: