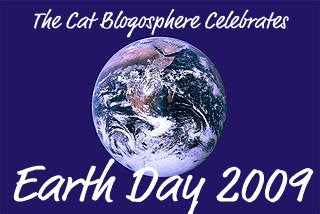 bloom where you is planted!! the earth will be better for it!!
Posted by Meowers from Missouri at 7:05 AM 7 comments:

it musta happened sometime ofur the weekend, when there was a flurry of the kitty-chasing torture known as "house cleaning", followed by a long, silent stretch when mom an' dad abandoned us, and then they came back an' subjected us to several periods of the "delicious smells in the kitchen during which time we are banned from same" torture.

then there was a VERY short overnight nap period, followed by more "cleaning" and "good smells", and then the doorbell rang and we ran for the hills--you can't be too careful these days: the talking box was heard to say that vishus deers are beginning to move inna woods! (mom here: i doubt that a vishus deer would ring the doorbell, nitro. you are sposed to be the alpha cat here, but edmund's the one who comes out to inspect people who arrive. what does that make you, eh?)

harumph . . . as i was reporting: so miss ginger an' mr gary an' son alek arrived, took ofur the kitchen chairs an' table wif mom while dad was smokin' roast beast out onna carport, an' we hadda hang out inna computer room an' behint the recliners. (ed: who's this "we"? you got a mouse in yer pocket, buster? i came out an' got pettin's an' lovin's an' admirations!! you hid, an' even cravenly put yer paws ofur yer eyes!) ahem. as i was saying: so they got to eat all the delicious smells, an' after a while our bean brofur, dash, an' his girl, leslie, came ofur an' ate, too (she brought a chocolate cake!), an' after that, miss g's littlest dotter, lanie, came to eat, too.

so they sat a long time an' they talked an' told stories (some of which we're gonna remember for later evvydense!;-) an' they were laffin' an' laffin' A LOT. then some bottles got clinked an' some sodas opened, an' different glasses got passed around, an' then there was more laffin' an' laffin' fur a long long time, an' finally efurryone left except dad an' mom. they put away all the food plates!! we din't get NUTHIN'!! more on that another time . . . .

an' that was when we noticed the teal kitty was tipped ofur an' his innards was gone; bast knows, he wasn't furry active an' was kind ov an odd feller, though he was elegantly feline-ish. but now our keen, analytical, scientific minds haff deduced that he has passed on. he is no more; he has ceased to be; he's expired and gone to meet his maker; he's a stiff (well, awright, he din't bend much in life, neither). bereft of life, he rests in peace, his metabolic processes now history. he's off the twig. he's kicked the bucket. he's shuffled off his kitty coil, rung down the curtain and joined the choir invisible. in short, (wait fur it . . . ) 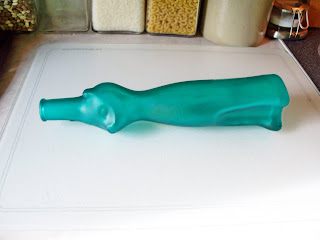 he is an ex-kitty. alas, riesling, we hardly knew ye!
Posted by Meowers from Missouri at 5:00 AM 13 comments:

can you guess what this handsome mancat's secret is? 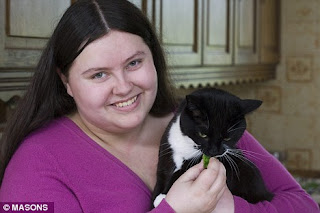 clickify to find out!
Posted by Meowers from Missouri at 5:00 AM 8 comments: