ed sez:
las' friday, mom an' me had a wing-ding-doo of a purrthday party wif lotsa people. (nitro an' nels hid a lot, but that just meant more pettin's for me an' xing, who is a love sponge an' will throw herself onto anyone who makes a lap.) the whole thing was a surprise for mom, an' she was just gob-smacked by the party. us kitties knew, of course, acause we hadda help snoopervise the preparations. daddy had been workin' on puttin' this togefur for almost six months--it was furry hard to keep our little fuzzy yaps closed! 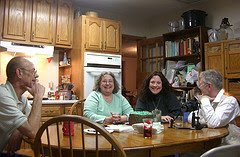 lotsa beans sent cards, an' both grammas an' auntie marilyn an' auntie ethel had called wif purrthday wishes an' had sented green papers for a "spa day"--mom was excited about that. she splained that she can go get petted good, an' haff her paws rubbed real special, an' the claws painted, but that it costs papers to get that done if yer a bean. glad i'm a kitty!

she was sad all friday that she hadn't gotten a card or a call from her heart's sister, joy, in omaha NE. inna afternoon, dad came into mom's work an' told her to cover her eyes for a birthday surprise. she did, an' then dad said, i'm bringing it in now--it has long, blonde fur and wiggles its tail--mom whipped her hands off her eyes acause she knew perfekly good an' well that daddy wouldn'ta got her a puppy--an' there stood joy, wagglin' her hindquarters an' laughin'. daddy had got her here, an' she stayed until noon on sunday. it was super-great for all us kitties, acause auntie joy LOVES critters an' cats especially, so we got lotsa the best skritchin's an' rubbin's an' cuddlin's efur! we has a picture of auntie joy, but she will snatch us all bald-headed (mom included) if we posts it, so we won't.

daddy had took off from work early, cleaned the house, an' smoked some pork an' some chick-hen, an' we all got some. we din't like the cole slaw an' tater salad, though. an' miss ginger, mom's bestest furriend in town, came an' brought a chocolate cake decorated wif palm trees an' an ocean acause she knew how much mom an' dad liked cancun! an' her daughter lanie sent a pretty handmade purrthday card--i put the bitey on it as a seal of approval later on. 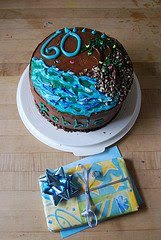 on saturday, mom an' auntie joy went out oglin' shiny beads an' stuff, an' inna late afternoon some out-of-town furriends stopped by, so dad smoked some more pork, chick-hen an' a whole half a sammon. yummmmmmmmmmmmmmmmmmm. we were all burping. we each an' efurry one just snatched that fish outta the fingers offering it, an' we nefur do that--foods hasta be deposited onna table or plate or floor for us to take it. not sammon--that's a whole 'nuther subject! we got leffofurs on monday at lunch, too--but mom don't let "locks" sit around furry long. we dunno why she calls sammon that; it doesn't look at all like a door fastener. 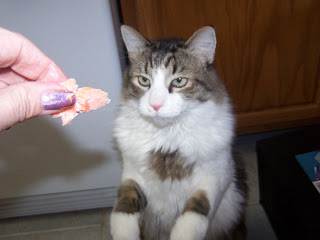 so it was a successful purrthday for both of us--it's a good thing we like the same stuff since we shares a purrthday. an' daddy succeeded in rendering mom speechless, which he can't do furry often, so it really was a special day we won't furrget!

Posted by Meowers from Missouri at 6:00 AM 13 comments: 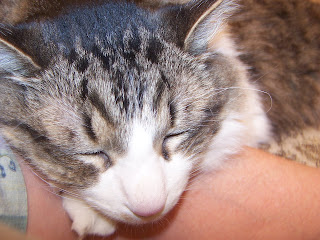 Posted by Meowers from Missouri at 2:52 PM 6 comments: